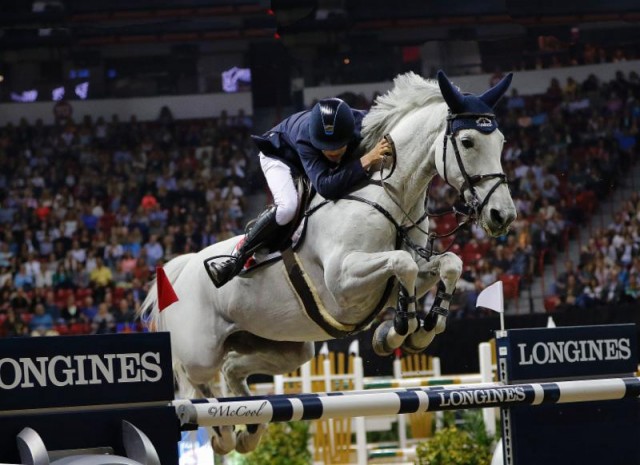 Though Allen and Molly Malone ultimately finished third at the World Cup, their speed round victory deserves another look.

The 19-year-old Irish show jumping phenomenon captured the attention of the world again in Las Vegas last Thursday as they sped to victory in the speed round phase of the FEI World Cup. In a series of twists, turns, rollbacks and incredible effort by both horse and rider, Bertram Allen and Molly Malone V turned in a winning time that was reminiscent of their first round at last year’s World Equestrian Games. While Allen wound up taking third at the World Cup after the second and third rounds of competition, his speed round deserves a second look.

To fully grasp the difficulty and length of the course while understanding the ridiculously small arena, first watch this course overview:

Okay, got that one memorized? Watch Allen and Molly Malone in action over the course:

Well, he made that look kind of easy. No one would best that time for the rest of the day, and Allen was remarkably diffident about his outstanding performance despite that fact that he had just outrode the world’s top horse and rider combinations. Steve Guerdat surpassed the 19-year-old Irishman to take the World Cup in later round and Penelope Leprevost was second with Allen settling for third.

If you missed our full recap from the World Cup, which also included a top-class dressage competition, check it out for more photos, results, and quotes from the riders, including what the world’s best really thought about this small arena and grueling courses.