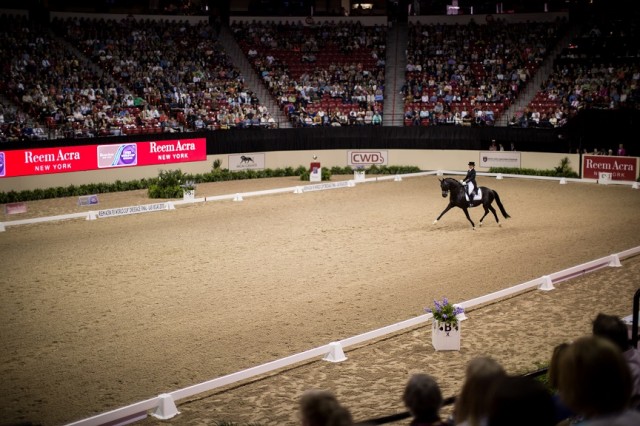 USDF Silver Medalist and dressage coach Sydni Otteson gives Horse Nation a professional’s critique of the atmosphere, events, and controversy surrounding one of the U.S.’s most prestigious events of the year.

Bling it on in Las Vegas!

You could not be in the Thomas and Mack Center and not be excited. The 2015 World Cup in Las Vegas in something I will never forget. As an aspiring dressage trainer, I was nearly crawling out of my own skin with excitement for the five days I was there. They say the best way to learn something is to immerse yourself in it and that is exactly what I did. You can live, breathe, shop and eat world-class horses for 5 days straight!

Wednesday was a warm-up day for competitors, and it was one of my favorite days to watch. As a trainer, I wanted to know see how these riders schooled the day before a huge international competition. I absorbed every detail:  how the horses legs were wrapped, if they were holding a whip, and what moves they schooled and for how long.

Charlotte Dujardin and Valegro in performance. Photo by Impulsion Images, used with permission.

Through this observation, I realized that these are still just horses and the riders are still just people. I saw spooking, missed changes, horses taking over, and horses tense with concern. Isabell Werth, who has more Olympics medals and World Cup appearances than I can count, had her horse sneak early flying changes on her in the extended canter… a couple of times. The reason I point this out is not to criticize, but to point out that even the best in the world make mistakes. They are handled quickly and effectively but mistakes are made. What a relief to all of us who are mere mortals.

Horse after amazing horse came in, and it was cool to see how different each horse was but how they all got the job done. There were long, slender horses and short, compact horses. Long necks, flat neck, upright necks, etc. Each horse seemed to excel in some areas and lack in others, but the better the riding, the less you noticed. One thing I took away from the week is that I can be more subtle in my corrections; less is definitely more. The riders with busy hands and large aids were very distracting from the whole picture and draw the attention away from the horse, which is the opposite of what we want to accomplish.

Through the rest of the week, I noticed that relaxed, fluid riding was rewarded more than tense, extravagant movement. I loved to see that! I saw horses that had a longer neck and used their whole back score better than the horse who could passage with his knees to his nose. This is encouraging for those of us who do not have the world’s best moving horses. Anyone has the ability to become more fluid in our transitions, smoother in our aids and softer in seat.

Of course you can’t talk about the World Cup without mention of Steffen’s unfortunate elimination. It was oddly not even announced; when the horses came back in for the awards presentation, he just wasn’t there and I thought maybe he decided not to come back in since Legolas had spooked when he was in the arena before (the crowd had been so rambunctious during Steffen’s test that he’d had to ask the crowd to be quiet.)

It wasn’t until I was walking around the trade show that someone told me he was eliminated for blood. I did not believe it! I attended the FEI Trainers Conference last year and I am telling you there is no one more fair to a horse than that man. Even at the World Cup, he was noticeably quieter and softer than a LOT of riders. I just refuse to believe it was anything short of a freak accident. Steffen was the only rider who entered the arena at the posting trot, doing a long and low frame and stroking his horse on the neck. There is nothing brutal about the man. I have no problem with the ruling as ‘the blood rule’ is there for the protection of the horse, but I will boldly defend any questions about his horsemanship or fairness. Things happen… we just hope they don’t happen at the World Cup.

What you can’t get from the YouTube clips and news stories is the spectacle and energy of the venue, the vendors, and all the performances and exhibitions. The trade show was amazing! The air was electric, people darting in every direction. It was like a feeding frenzy around every shopping booth where customers were swiping credit cards like they were weapons. Everywhere you looked there were big names: I ran into Charlotte Dujardin twice, Steffen Peters, George Williams, Laura Graves, Isabell Werth, and Adrienne Lyle among the crowd.

The trend of new colors and bling was definitely apparent in the ring and in the trade show. Every booth had sparkly, colorful show attire. I saw boots and saddles in every color adorned with patent leather accents and crystals. Helmets, browbands, shirts, halters, coats, stock ties, brushes… you name it and there is bling on it. Whether you love it or hate it, the days of a black and white sport are over!

If you ever have the opportunity to attend an international competition, it is worth every penny. I was in dressage heaven! You will learn so much and experience horses in a way that we don’t get the chance to very often in the US. The next chance to go to a World Cup on US soil is in 2017 in Omaha, Nebraska.  Start saving now and I’ll see you there!

Many thanks to Sydni Otteson of Prestige Dressage, and Becca Tolman of Impulsion Images for sharing their experience at the Las Vegas World Cup! You can see many more breathtaking photos of Dressage, Show Jumping, and other moments from the World Cup on Impulsion Image’s Facebook Page.