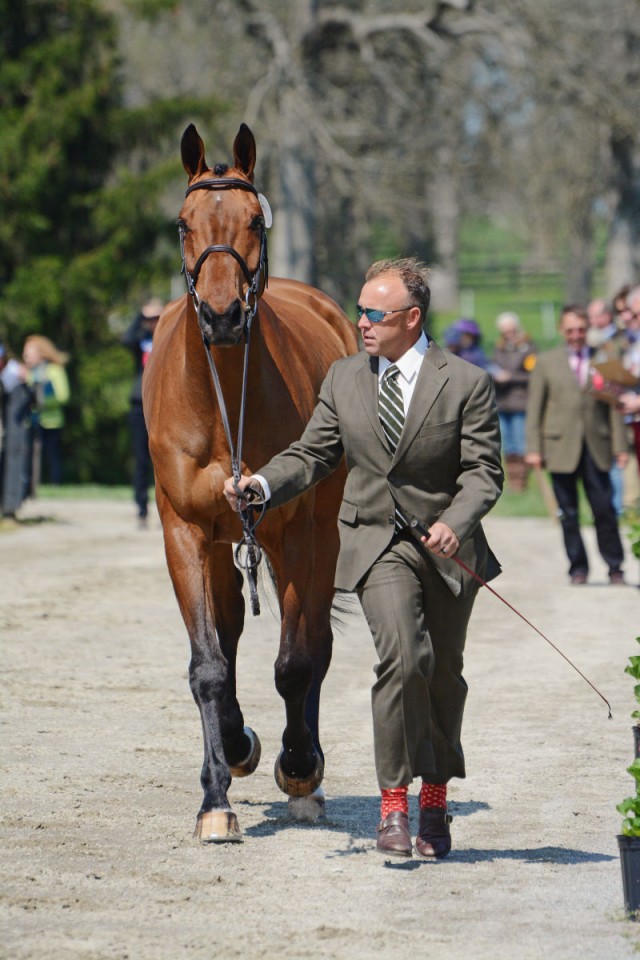 Eventing Nation has the latest.

Horse Nation’s sister site Eventing Nation is live on the scene all week long at the Kentucky Horse Park. Check in often for the best, most comprehensive Rolex coverage on the web!

Seventy-five horses will move on to dressage following the first horse inspection at the Rolex Kentucky Three-Day Event. All horses presented to the ground jury were accepted on a blustery afternoon here in Lexington, where a cold, wet morning mercifully dried up beautifully to give us ideal conditions.

Sadly, the afternoon’s festivities started out on a somber note, as it was announced that Kyle Carter had withdrawn Madison Park. Jen Carter posted on her Facebook page following the jog that “Parker” is just fine, but a last minute shoeing issue forced his withdrawal.

While all 75 remaining horses were ultimately accepted, the jog was not without drama. The entire crowd had their hearts in their throats when Anthony Patch was the first horse to be sent to the holding box. Laine Ashker’s Rolex journey ended very abruptly last year when she had to withdraw “Al” from the holding box due to an untimely abscess. With her fate hanging in the balance again, the crowd (and journalists) tensely held their breath waiting for Al to be re-presented.

We’re relieved to report that “Al” was accepted after jogging down the strip a second time, and he and Lainey received the loudest cheers by far when that much anticipated announcement was made! EN has predicted Lainey and Al to finish in the top 15 this weekend and also named them the Dark Horse, so now their work begins.

Ballylaffin Bracken was also sent to the holding box with Kristin Schmolze and was accepted upon re-presentation to the ground jury. “Rox” is a Rolex veteran and seemed to wonder what all the fuss was about as he went down the jog strip again, playfully giving Kristin naughty love nips along the way.

Those were the only two horses sent to the holding box. Tim Bourke and Luckaun Quality were asked to jog twice before being accepted, as were Katie Ruppel and Houdini, who was accepted toward the end of the jog strip with a laugh from the crowd after looking like he was going to keep going straight on to cross country.

Houdini wasn’t the only horse looking amped up and ready to go. La Biosthetique Sam FBW played a bit down the jog strip with Michael Jung, almost as if he was saying, “I’m heeeeeere!” We’ve predicted that this weekend will be something of a coronation for Sam, who is largely expected to take home the win.

But he’ll have to get past reigning Rolex champion Bay My Hero first, who won the Best Jog Antics Award for his second CCI4* in a row when he told William Fox-Pitt exactly what he thought about being required to jog politely, rearing dramatically at the end of the jog strip, just like he did at Burghley.

With the weather cooperating, fashion was out in full force on the jog strip this afternoon, and we’ll be bringing you our picks for EN Best Dressed shortly. You’ll get to be the judge, with the winning rider receiving a $100 SmartPak gift card! Stay tuned for that, plus a full photo gallery from the fabulous Kasey Mueller.