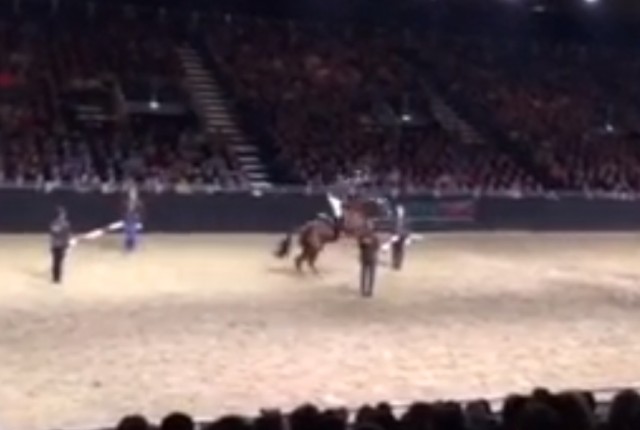 This demo from the 2015 Equitana Stallion Show in Germany redefines “jump crew.”

Equitana’s Stallion Show is supposed to showcase native German warmblood and pony stallions to help support the breeding industry, demonstrating the athleticism and versatility of the nation’s horsepower. But this particular demo from March’s show introduced the equestrian internet to a brand-new interpretation of the term “jump crew.” (Note: must be logged in to Facebook to view.)

Now, I’m as impressed with the jumping ability of the horse and rider as much as the next guy, but those human standards know how to hustle! The choreography of setting the jumps was as much fun to watch as the horse itself, and clearly the Equitana audience agreed. No more running to the jump to fix a dropped rail or change a height — you ARE the jump.

The 2015 Equitana was held in Essen, Germany over the course of an action-packed week that was part horse show, part exposition, part seminar, and part trade show. Multiple disciplines were featured, from show jumping to cutting, with numerous top-name trainers, competitors and performers from Germany and all over the world on the show bill.