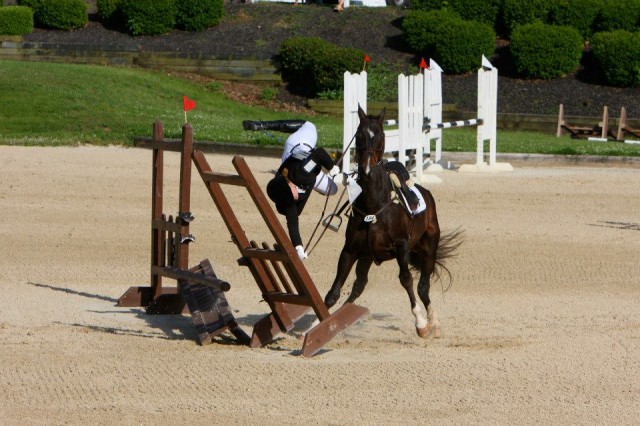 Kara Fortier: “After a few run outs, we finally made it over the jump. We had already jumped it once or twice before, but they weren’t nearly as awkward as this one in particular…”

Sydney Doss: “This is Sydney and trav missing their distance like always…”

Emily Nash: “My horse, Reina, was having a tense jump school in a new arena and can get weird about oxers. This was her reaction to a fence that looked a little different. I was just proud of her for going over!”

Lauren Lefebvre: “My lesson horse Nenzo was busy staring at the scary blocks next to the jump and forgot he needed to jump… So instead he launched himself into the air over our little cross rail. Here’s to riding keeping us on our toes! (Or, on the neck of the horse.)”

Carrie Levesque: “You get lots of “Jumping Oh Crap Moments” but here here is a “Polo Oh Crap Moment!!” This is my husband, Charles, playing a mare named Peanut. Someone fouled and crossed the line…not sure who! My husband swears it wasn’t him!!”

Anne Czerwonka: “​This was this past year at MayDaze HT in Lexington, KY.  After having a stop at the first fence of a combination, we came back to the oxer leaving long, causing me to get left behind.  My horse stopped at the second element as well and it caught me off guard, sending me flying off the side.  My horse managed to fracture his skull on the standard but other than that, we were fine. This was, by far, my biggest fail.”

Sea Jones: “We were looking for lesson ponies for our Hunter Jumper program, and she was in the area so we checked her out. 17 year old Welsh X pony, 12.2 hands. She had a past of pony clubbing and schooling shows so we went to check her out. Walk trot she was good, but after going about half the arena twice at the trot, she had enough. This picture was taken after asking her to canter.”

Judy Callsen: “Here’s a short movie of my daughter riding out a series of bucks as she jumps up a bank with her pony Rio.”

Jen: “Here is Bop (OTTB) at his first show.  It didn’t go well.  Whenever I got near him with a saddle he either reared or tried to kick me.  He was having none of it.  He got loose many times  during those 2 hours that we were there at the show.  When a show official came down and told me I should break a horse at home, I knew it was time to go.  We’re going to try again this year though.  We also tack up ahead of time these days. Photo by Rough Coat Photography.”

Jana Lyle: “I rode a little too aggressively out of the water at Heritage last October.”