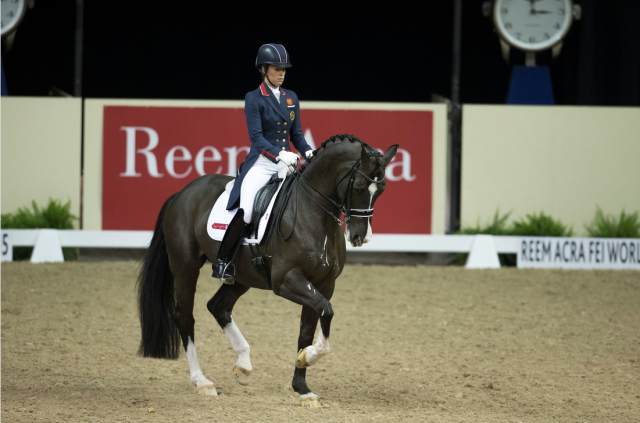 Charlotte Dujardin and Valegro are on a whole other level … and we’ve got the video to prove it.

As if we expected anything else, Charlotte Dujardin and her beloved Valegro wowed the U.S. crowd in Las Vegas yesterday to score a whopping 94.196% in their freestyle performance. Performing their well-known dance to music from How to Train Your Dragon, the crowd couldn’t contain itself as the pair showed off their flawless movements around the sandbox.

Reactions on social media from those who had witnessed her ride in person ranged from speechless to moved to tears, and for good reason. It’s certainly a treat to see the world number one ranked pair performing on U.S. soil, and it surely was an unforgettable memory for those in attendance.

Charlotte posted on her Facebook following her performance with the following:

“Honestly I am so lost for words. I’ve said it so many times and it brings me to tears to think about it, but I don’t think we’ll ever see a horse like Valegro again in our lifetime. He is my soulmate, my best friend and I cannot believe how hard he tries every time we go down that centre line.”

Congratulations to Charlotte and “Blueberry” on another fantastic finish!