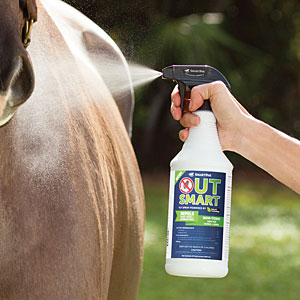 SmartPak just keeps raising the bar … this time, with its own formula of plant-based fly spray that really works!

In a world full of chemical-laden fly sprays that work well but are harmful to inhale and natural-based fly sprays that don’t do anything except cost a lot, horse owners have been wondering: is it just too much to ask to have a more natural fly spray that’s not full of toxins, but actually works to keep the bugs away?

And SmartPak answered: nope, it’s not too much to ask at all, and promptly introduced OutSmart Fly Spray, a plant-based repellent that really, truly works.

OutSmart is plant-based and non-toxic, meaning that it’s totally safe for both your horse and yourself (because let’s not fool ourselves, we’ve definitely used fly spray on our own skin before.) It doesn’t have that acrid chemical scent and doesn’t leave your horse feeling greasy after application. Most importantly, it works to repel house flies, stable flies, mosquitos and ticks. Check out SmartPak’s video proof:

Good stuff! OutSmart has been so popular that the 32-ounce spray size is on back order, but try the gallon refill jug with your own spray bottle for a good value. Warmer weather means more riding, but also the beginning of fly season, so make sure you’re ready!