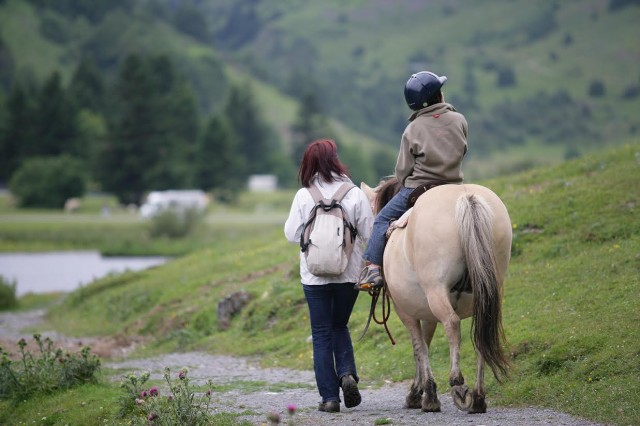 As an equine-savvy parent who knows firsthand how unpredictable horses can be, watching your child spread his or her wings and fly (or, at least, pop over a jump or two) can be nerve-wracking. Tara La Bree shares her experience.

My son and I both had two really great rides the other day. I love to see how much he is progressing. He’s only 11 and still my baby boy, and I am mama bear, so sometimes I want him to take it easy and be cautious because I forget that he is capable of so much more.

A thought struck me as I was watching one of his lessons a few weeks ago, and it has definitely been confirmed since then: he rides better than I do now. He has learned and absorbed so much and knows how to do what he needs to do, and when to do it. Combine that with a fair amount of natural talent (which I don’t have), and he really is better than I am, and I need to get out of his way and just let him ride.

The mama bear in me says they’re not quite ready yet. She tends to anticipate and escalate and wants to have everything her way. He’s my tiny little baby boy, and I don’t want him to get hurt.

But as he was riding her around the other day, I watched her get strong and him soften her perfectly. She likes to bulge to her right, and he added right hand and right leg through the turn without being told how, and as though he’d done it a million times before. She tried to hop into a canter before he asked, and he held her and made her wait. Then he asked her to canter, and she did — beautifully — and then slowed and came back as soon as he told her to.

Since then, he took his first official lesson on her with our trainer. Right before he got on, he said, “I’m just going to walk and trot today since it’s our first lesson.”

“OK,” I said, “you don’t have to rush anything today.” Twenty minutes later, I was recording them cantering down the seven-stride outside line. So much for walking and trotting.

So, they’re ready. I might not be, but they are. This was my plan all along — now I just need to get out of their way. Who knew that would be the hardest part?