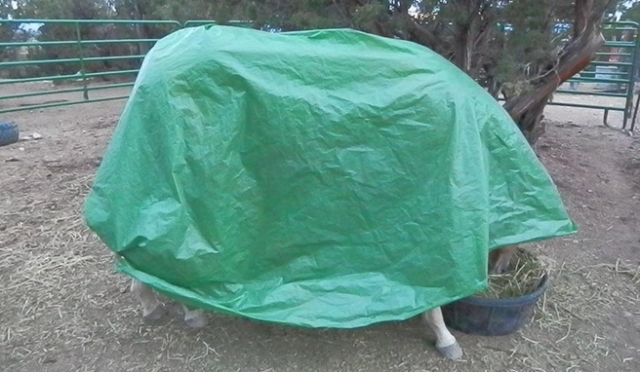 These reader-submitted horses are pretty much OK with everything!

Our 24-hour photo challenge this week called for “tolerant horses,” giving you guys the freedom to decide just how best to portray that quality. Many submissions fell under one of three categories: costumes, clothes or tarps. Here’s our favorites from each division! We’ll have a “Best of Show” coming up soon as well.

Dawn Klein Longman: “My lovely mare all dolled up for a ‘Pimps and Hoes’ Halloween extravaganza.”

Kim Kester: “My 1/2 Percheron 1/2 QH mare Dusty was kind enough to be Little Red Riding Hood, while I was the big bad wolf in grandma’s clothes. She had stuffed arms on her chest that carried a basket.”

Emily Kate: “My OTTB who, as his name suggests, is a big Dill. The girl that retrained him dressed him up for Christmas”

Yay for the ponies putting up with my nonsense. Rode her around like this too! Afterwards she got to go on a trail ride as a reward 🙂 #horsenation #quarterhorse

Rachael Rosenthal: “‘I’m a baby moose, in shoes!’ (Build-A-Bear shoes are the exact same shape as baby horse feet, just in case anyone is curious)”

Brittany Hook: “Ygritte minds her melon. And blames the children.”

Ashlea Carravallah: “My ever so tolerant boy. He lets me get away with a lot.”

Tarps (And Other Assorted Training Aids)

Christine Alexandra Clolinger: “Cheri getting used to the noodle curtain of death for the first time. Now we can back up and leg yield through it!”

Victoria Reid Smith: “Who needs a turnout when you have a tarp?!”

Heather Malamisura: “My mare and I, just going for a walk with our tarp.”

Kendra Shook: “My young Quarter Horse, Abednego, he has always been very tolerant of everything I throw at him and is a very quick learner. The story behind this photo: I had first introduced him to the tarp and when he first saw it he freaked, one minute later he was completely desensitized to it and let me put it completely over him and he went back to eating (at this time he was under two years old!). I started desensitizing him to many things when he was very young, even before he was 1 year old and I think that is what has helped him be such a laid-back horse. I love my little guy, and I am so lucky to have him”

Kayla McCracken: ” It was really windy one day so I made a game out of the tarp with my 2 year old. I would throw it up in the air near him and try to make it land on him like a cape. I made it after about 10 tries!”

Check back next Tuesday for the announcement of our next 24-hour photo challenge! Make sure you’re following us on Facebook and Instagram (@thehorsenation) so you won’t miss out!