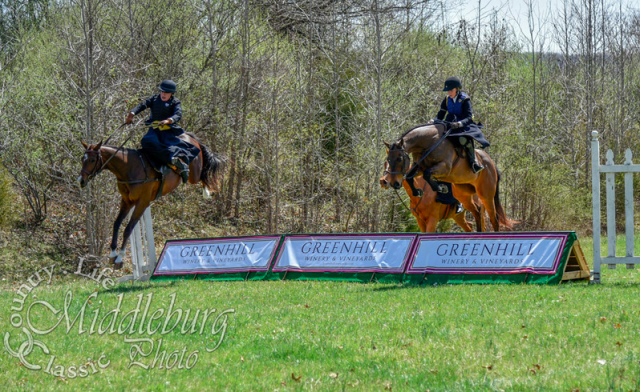 Check out the full report on the first side saddle steeplechase in the States since the 1930s, which ran on Sunday!

The 49th annual Loudoun Point-to-Point Races ran on Sunday, April 12th at Oatlands Plantation of Leesburg, Virginia. The races are a traditional kick-off to the area’s spring social calendar as the horses surge about the scenic countryside for an exciting day of traditional steeplechase. This year, the addition of two exhibition races to the card drew crowds eager to witness a spectacle that had not been seen in the United States since the 1930s: a side saddle chase. The inaugural running of the Esther Everhart Memorial Invitational Side Saddle Chase drew a field of 14, which was then split into two fields (one to race on the flat, the other over jumps).

While riding aside used to be the only way for a genteel lady to get anywhere on horseback, the practice fell out of vogue starting in the early 2oth century as women, inspired by the suffrage movement, began to ride astride. Just a few die-hard enthusiasts who sought to preserve the past continued riding side saddle, but recently the art has experienced a fresh surge of popularity, spurred by a few individual inspiring women but also, believe it or not, by a television program. Yep, our old favorite Downton Abbey is credited with rekindling interest in riding sidesaddle. (Not a regular Downton fan? Check out Carla Lake’s review of the point-to-point episode to get caught up on the important bits.)

It’s interesting to note that Carla’s review of the point-to-point included that the fashions sported by the classy riders was on point: several lady riders from the Dianas of the Chase, Britain’s only aside steeplechase, served as both fashion advisors and riding extras and doubles for Downton Abbey‘s race. After all, who better to advise than the only group of women in the world currently active in the very activity the television show was setting out to portray? When American side saddle enthusiasts Maggie Johnston and Devon Zebrovious met Dianas organizer Phillipa Holland on an Irish hunting trip in 2013, the seeds of an idea were planted.

Riders who were interested in participating in Sunday’s exhibition race were required to attend an assessment ride and training day to make sure they would be safe to compete. Invited riders then prepared for the race, whose field size of 14 was split into two sections (any field larger than 10 at the Loudon races is routinely split for safety’s sake, no matter the race.) Zebrovious (who is also the 2013 and 2014 USEF Ladies Side Saddle Hunter National Champion) won the jumping races aboard Quest and Annie Sittman won the flat with Moneytrain.

Learn more about the race via its Facebook page.

Our hats are off to the race organizers and all of the participants, who are keeping history and tradition alive aside!

More photos from the day, courtesy of Middleburg Photo: