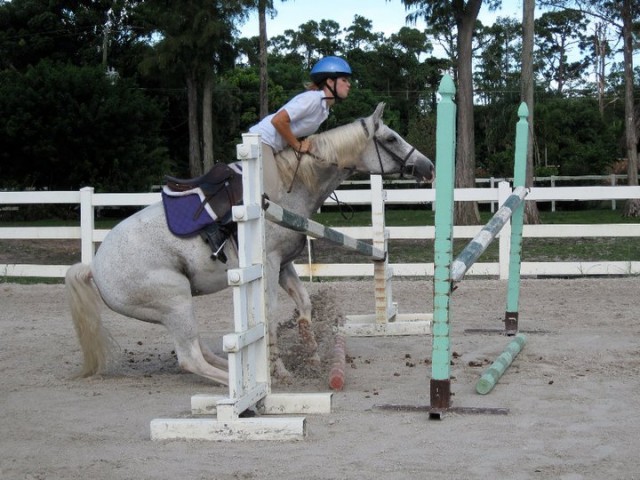 Leslie Threlkeld: “This mare is a very sensible type and a little jumping bean, but at a recent schooling show she forgot how to horse and kangaroo hopped into the first fence on course instead. She had no where to go but up and kindly punched me in the jaw with the top of her head along the way. Young horses are so humbling!”

Elizabeth Panchul: “When I first purchased my horse, Blue, he would either reject ditches or launch 3ft in the air to avoid it. In this fail picture I walked him up to the ditch and it took him a while before he decided to unexpectedly jump over it. I got left behind a lot, I mean a lot. The video is him 6 months later, casually going over the exact same ditch. Taken all at the beautiful Isola Stables in Portola Valley.”

Christy Puller: “Attached is a photo of my 11 year old Hanoverian gelding, ‘P.J.’ We have recently started schooling 3rd level and this is his first attempt at teaching him the flying change … Obviously he would get a 10 if there were an ‘expression’ category! Who says dressage is boring?”

Mindy Hussey: “So the other day I was schooling my horses and one particular horse was being very good. My assistant asked me how good so I gave her the thumbs-up over the fence…

My darling little student said that looked easy and she and her horse could do it too. So the picture below was her attempt at giving the thumbs-up over fences. It didn’t work so well for her. But she and her horse survived with no injury. They are still working on thumbs up! Oh and yes she was screaming in that picture.”

Nikolette Giordano: “After chipping the second rail the first time around sugar decided she didn’t want to jump it again. Miraculously she didn’t even knock down a pole. She was able to duck left and avoid the jump after stopping quickly.”