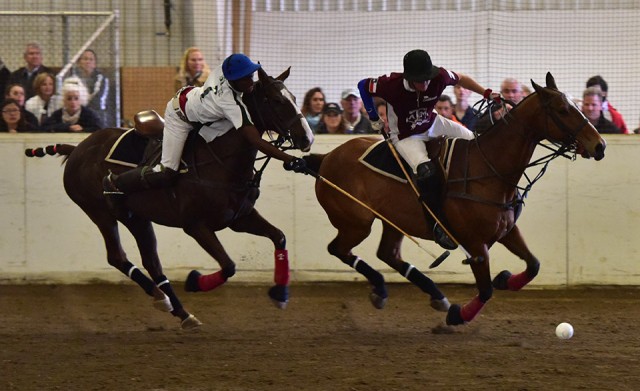 Showcasing the best of the best in college polo, the Men’s and Women’s National Intercollegiate Championship tournaments took place last week at the University of Connecticut.

The Cornell and defending champion University of Virginia women competed in the 2015 NIC finals at UConn’s Horsebarn Arena. Both teams came out to win and played spectacularly until the very end. In the 1st Chukker, Cornell came out strong scoring 7 points to UVA’s 2. All three Cornell players contributed two goals to the overall score. In the 2nd Chukker, the UVA Women found their stride and began to rally back with 7-points — 5 came from UVA star Julia Smith — ending the 2nd 11-9 with Cornell still leading. In the 2nd half, both teams would go goal-for-goal with UVA slowly climbing back in the 4th Chukker. UVA would eventually tie and lead by 1-point, but it wasn’t enough to hold Cornell back who would win 17-16.

“They played awesome. We knew the job that we had to do coming out and we knew how difficult it was going to be and UVA has been a tough team. Our girls came out and they did what they had to, they didn’t loose it, they didn’t get rattled. I can’t ask for any better obviously.” — Cornell Coach David Eldredge

Following the Women’s Championship, the NIC tournament concluded with the highly anticipated Men’s Final between Colorado State and Texas A&M.

In the 1st Chukker, Texas A&M wasted no time putting points on the board with a 5-0 lead before CSU scored two of their own to close the chukker 7-2. Casey Woodfin and Cacho Galindo of Texas A&M would contribute 3 goals each to their total score. In the 2nd Chukker, Texas A&M would sustain their lead by adding 5-points, but CSU would find its stride by scoring 6 led by Kareem Rossner who contributed 3-points to end the half 12-8. In the 3rd Chukker, CSU would continue its momentum adding another 7-points and holding Texas A&M to 3-points to end the chukker in a tie 15-15. The Final Chukker started out with both teams going goal-for-goal until Jared Berg took matters into his own hands scoring two back-to-back goals and giving CSU the title 20-17 final score.

CSU brings home the title for the first time since 1999. “It’s truly amazing and feels unreal to know we’re bringing home another national championship banner for the first time in so long,” CSU captain Kareem Rossner told The Coloradoan. “We’re all proud to bring notoriety to the club and the university.”