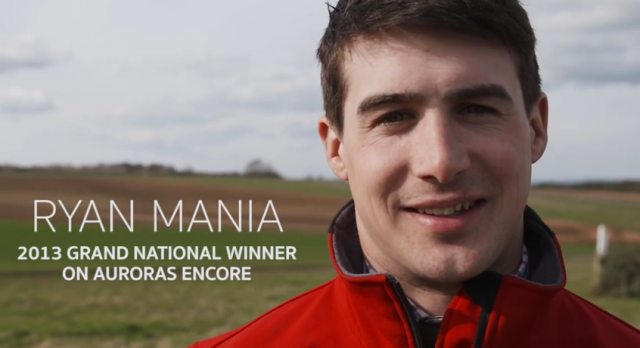 Channel your inner National Velvet and ride the Grand National fences with this helmet cam!

Ryan Mania won the famous Grand National steeplechase in 2013, and he took the opportunity to show us how he rides some of the fences that you see on course with his helmet cam.

It’s a really neat perspective, as he walks us through his winning trip and how he rode his horse to each challenge. Ryan won even with a loose horse chasing his mount, Auroras Encore, down the stretch — pretty impressive if you ask us!

Another cool fact about Ryan’s winning ride is that he was sent off at long odds of 66-to-1. The Irish-bred Thoroughbred last raced in January of 2014 and amassed two hurdle race wins and six steeplechase wins in 47 starts. Auroras Encore raced until he was 14, returning to the races as a 10-year-old after taking a year off. Leading up to his Grand National triumph, he failed to hit the board in his first five races that year, which was most certainly a deciding factor when the bettors were deciding on whom to place their money.

Ryan and Auroras Encore were out to prove everyone wrong, though, and took home the win nine lengths in front. It was also Ryan’s first attempt at the legendary race. The scrappy horse was retired after his last race after a fracture was sustained in his right foreleg.

Ryan also had a string of bad luck, falling in a race the day after the Grand National and sustaining neck and back injuries, prompting the medical team to airlift him to a nearby hospital. Ryan would later return to racing but announced his retirement in 2014.

Check out the full video of Ryan and Auroras Encore’s winning ride here.