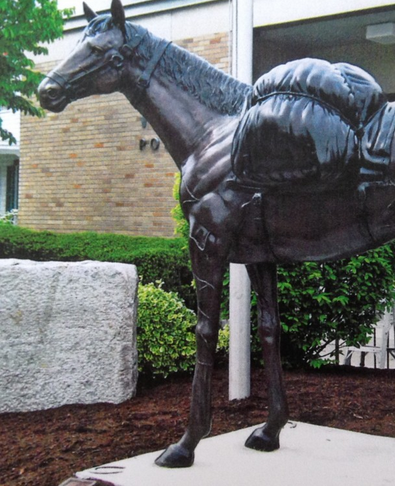 With a name like Horseheads, you know there’s a story.

According to the Horseheads Historical Society, Horseheads is the only town and village in the United States that is dedicated to the service of the American military horse: a military pack horse statue, dedicated in May of 2013, stands near the Village Hall as a memorial to the humble yet critical piece of any campaign; the entire town calls itself a 28-square-mile memorial. But the story of how this town, located in New York’s southern tier, got its name is more grisly than the statue and memorial would have you believe.

Rewind to 1779, the middle of the American Revolution. Major General John Sullivan, under orders from George Washington, marched 4,000 to 5,000 men into the frontier of western New York state, carrying out instructions to specifically target Loyalists and nations of the Iroquois Confederacy, which had sided with the British for the war. Sullivan’s campaign culminated in one single battle at Newtown, where about 1,000 Loyalists and Iroquois were slain, and a “scorched earth” systematic destruction of Iroquois villages and crops along his route.

Accounts vary, but a high estimate states that Sullivan’s march included about 1,200 packhorses, responsible for carrying supplies as well as military equipment. While western New York today is crisscrossed by major roadways, it was essentially frontier in 1779, and Sullivan’s men were forced to hack through dense forests, swamps and waterways, as well as either climb or meander around substantial ridges and hills. By September, on the return trip back east, many of the horses were too spent to continue, and Sullivan ordered that the worst of the herd be destroyed. To conserve ammunition, many of the horses had their throats cut and were left along the banks of the Newtown Creek.

Map showing approximate location of the village of Horseheads.

Iroquois outside of Sullivan’s march of destruction found the remains of the horses long after the army had left the area. Here again accounts vary: the more embroidered tales state the Iroquois left the skulls set up along the trails to warn white settlers coming into the area that “they could be next,” other accounts state that the Iroquois simply scattered the bones. The most conservative story is that the natives simply called the mass grave “the valley of horses’ heads” and the name stuck. Regardless, early settlers in the area did come across the bones of Sullivan’s faithful horses and the settlement that grew along the Newtown Creek became known as Horseheads.

Today, the cheerful streets of the village…

belie the fact that the town was built on the final resting place for dozens of hardworking and loyal equine companions–but the memory of their sacrifice lives on in the name of the village itself.

Special thanks to the Horseheads Historical Society for providing materials. Go Riding!