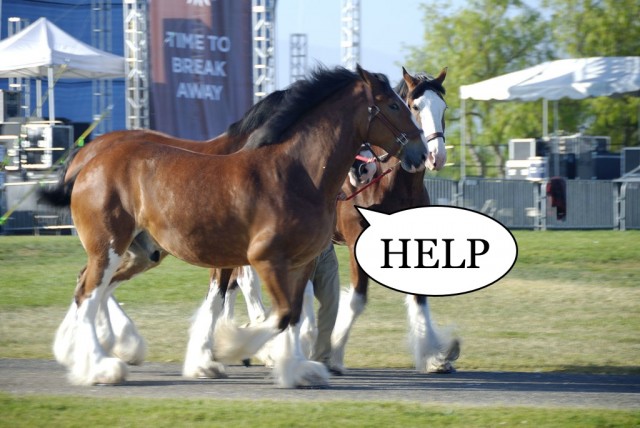 What’s the point of rules if you can’t break them every now and then?

Look, I like to have guidelines in place at the barn to keep myself, the other farm employees and the horses safe and happy. But sometimes I just can’t help it, and I understand that I’m courting death and destruction in my decision to do some of the things I do. And I’m willing to bet that if I’ve broken some of my own rules, the rest of you have too. What else would you add to the list?

Hand-feeding horses can turn them into pocket-grabbing finger-nipping monsters … and I realize fully that I’ve created a monster in my own Red for slipping him horse cookies. But is that going to stop me? Heck no. Look at his face. How am I supposed to resist that?

Yes, there are lots of people who make this look easy … but I’m talking about those times you just slither right on from the fencepost and wander around the pasture (if you’re lucky) or hang on while your horse cavorts about and does naughty things to try to remove you (if you’re unlucky). I ambled from the barn out to the pasture on Red last summer to turn him out after our rides and didn’t want to be bothered to carry a halter back, so we left it hanging in the tack room. It worked out well … that time.

Teach the horses to work zippers.

It starts innocently enough when you notice you have a particularly dextrous horse. Four ripped jackets later, you realize that perhaps that was a bad call. But it’s so funny and cute! Other learned behaviors like “giving kisses” can also be grouped in this category.

Sit on horses in the pasture.

I’m going to go ahead and incriminate myself: the above photo was taken in a pasture that was maybe half a mile long and a third of a mile wide, offering lots and lots of room for equine shenanigans. There also maybe have been a bit of alcohol involved prior to this particular adventure. Regardless, we thought it would be a good idea to hike to the horse pasture and clamber aboard some of our favorites. From the point of view of someone who always wears a helmet and also respects the fact that truly no horse can ever be 100% trusted, this was not the world’s greatest idea. (Obviously this horse agreed with me judging from her facial expression.)

Lead the horse with just a lead rope.

I will admit that there are many, many times in which this is totally acceptable … until the horse decides that it isn’t, and suddenly you’re dirt-skiing across the driveway hanging on for dear life wishing you had just been a hair less lazy and grabbed an actual halter.

Lead two (or more) horses at once.

Again, this is another one that can go just fine most of the time: I work with draft teams and sometimes you really don’t want to separate them. It can save you lots and lots of hassle and time in schlepping back and forth from pasture to barn to move multiple horses. Except for the moment that one of your normally-placed horses decides it doesn’t like his lifelong best friend and tries to take a chunk out of his neck — or my personal favorite, when both horses decide to split but go in opposite directions. (This used to be a method of execution back in ye olde days … and yet we still voluntarily do it day after day.)

Lead the horse from the car/truck/ATV/whatever.

I worked on a ranch in which we would sometimes move half of the broodmare band at a time, with only two people available to help — oh, and the pasture was a solid three-quarters of a mile across the property. One girl would drive the four-wheeler at a crawling pace while the other sat backwards behind her, juggling the lead ropes of four broodies. Safe? Well, not by the book, no … and I know there have been tragic headlines about people losing hands and limbs doing this. I can only say that we were lucky, and tried to do this as safely as possible. (It helped that the horses were blessedly used to doing this.)

But really … if we eliminated all of these not-so-great-ideas from our equestrian life, where would the good stories come from, those memories that we’ll look back on so fondly?

What would you add to the list, Horse Nation?