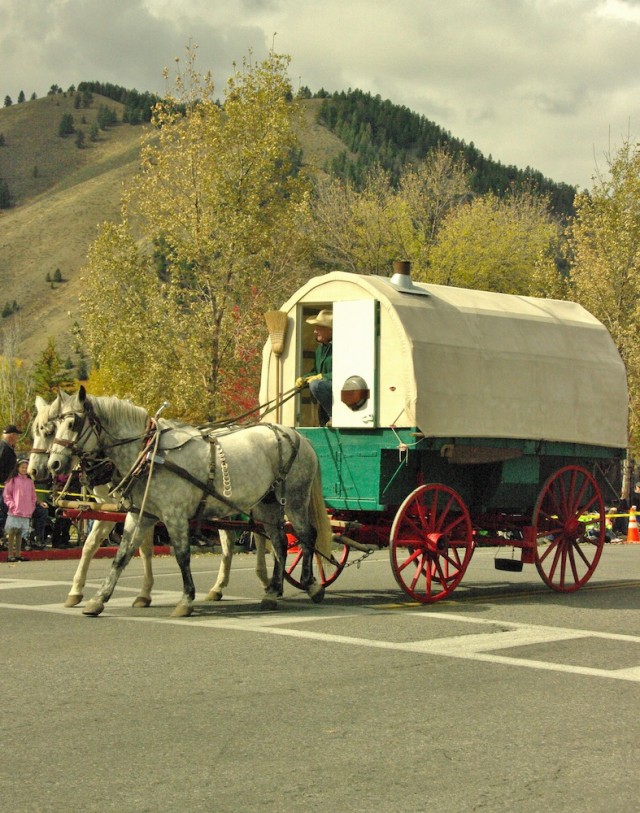 It’s time to hitch up the sheepwagon and head out for the open range.

The term “sheepwagon” is likely to conjure up one of two images in your head. You will probably picture this:

Sheep in a wagon. Amanda Slater/Flickr/CC

The original “tiny house,” containing all the comforts of a rolling home, the sheepwagon was a critical tool for the sheepherders of the Rocky Mountains, primarily Wyoming, Utah and Idaho. Sheepwagons first rolled onto the scene in the 1880s, though there’s some debate over who “invented” the original design. These wagons allowed the sheepherders to live out in the pastures with their flocks in comfort; when changing pastures, the wagon was simply hitched up and pulled to the next site, much like a modern RV.

While each sheepwagon was custom-built and individualized to the man that lived in it, the wagons were typically painted green with a white canvas roof, lending them a distinctive look as they trundled through the mountain meadows of the West. The roof section usually stretched further than the wagon box, making the sheepwagon look a bit like a mushroom from the back or the front. Though plain on the outside, the sheepwagon’s interior included everything necessary for a comfortable life in the wild: bed, table, benches and stove both for cooking and heating the space. The double Dutch door both allowed the sheepherder to keep an eye and ear on his sheep when inside the wagon, and allowed him to drive his team (unlike a conventional wagon, there was no driver’s bench in a sheepwagon.)

The best-known sheepherders of the American West, who utilized the sheepwagon to great extent, were the Basques. The Basque region included the lands at the Spain-France border, a culturally-rich area with a long history of independence. Many Basques came to America to become sheepherders (others went on to great success in the shipping industries.) Idaho in particular became a destination for many of these immigrants, and towns and cities all over Idaho celebrate the Basque culture to this day, and the humble horse-drawn sheepwagon is often part of parades during such festivals.

A few companies are still both restoring old and building new custom sheepwagons, especially for those seeking a “tiny house” or a creative way to achieve a simpler lifestyle. While many camping sheepwagons are now fitted for the highway to be pulled by trucks, some adventurers are still hitching up the team and hitting the trails for a true rustic camping experience.

Sheepwagons have miraculously stood the test of time and may be reaching a new level of popularity while remaining firmly grounded in history. How about you, Horse Nation? Would you take one out for a spin?