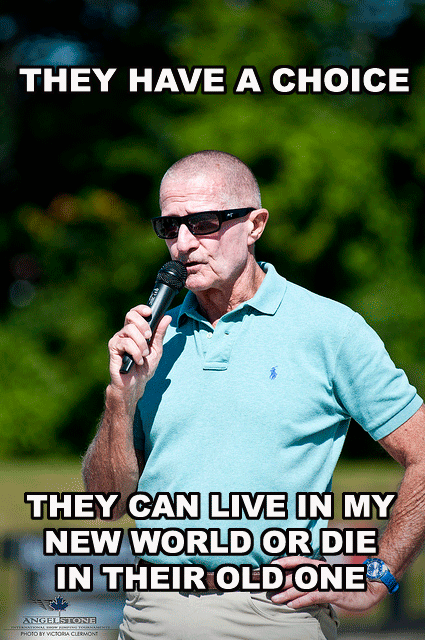 Is he really the horseman he claims to be?

Some new footage was recently shared exclusively with Horse Nation that is sure to shock the horse world to its very core. Horrifying examples of horse handling and abysmal form make up this video compilation of George Morris and his fellow Master Class instructor Anne Kursinski at their respective facilities over the past several years.

Undercover reporter Breyer Lily captured the evidence in secret as a quiet stable hand, and finally went public with the footage “for the sake of the horses.” The video includes truly terrible scenes of horses being shoved at fences, saddles slipping off and under horse’s bellies, and even Anne being dragged several yards on a lunge line until she disappears from view.

Please note that the footage you are about to see could be very disturbing to some readers.

In response to the footage, the United States Equestrian Federation has said they are removing the Horse Mastership Training Sessions from their archives, and are reevaluating their relationship with both world-renowned instructors.

“The horsemanship we’ve seen here today does not represent the USEF Mission,” said an executive at the USEF Headquarters, who wished to remain anonymous. “Moreover, George … a matching mauve saddle pad and suede dropped noseband? You’ve done so much for the sport and now this. It will take time for the organization to recover from the shock.”

Representatives for Kursinski and Morris did not provide a response or comment for this story.