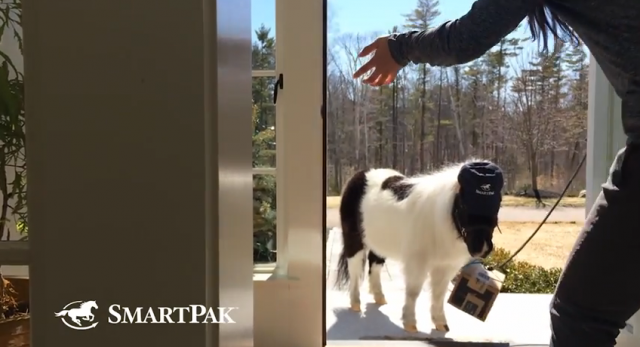 Just when you thought SmartPak’s already amazing shipping policies couldn’t get any better, they just did.

From a SmartPak press release:

Using real ponies to deliver packages, SmartPak proves innovation is in its DNA

PLYMOUTH, MA – April 1, 2015 – Today SmartPak announced the launch of their new and game changing PonyExpress delivery service. This revolutionary service will immediately supplant UPS as the primary, replaced by herds of real-life ponies.

“We saw what Amazon was doing with drones and realized that we as well as the rest of the market were overly focused on speed of delivery and not enough on the actual experience”, said Donnie Steele, Chief Marketing Officer for SmartPak. Steele continued, “Today, that all changes. Effective immediately each and every SmartPak shipment will be delivered by hand… nay, by hoof to your home or barn!”

To prepare for the launch of the new PonyExpress service, SmartPak has been secretly buying up the nation’s supply of endurance ponies. Additionally, the company has ramped its technological capabilities, outfitting every pony with a GPS monitor to power the proprietary “PonyTracker” tracking system. “We have always understood how important it is for riders to be able to track their packages in real-time,” said Sarah Paull, SmartPak’s Director of SmartPaks and Brand. “That’s why we created the ‘PonyTracker’ service to operate alongside our PonyExpress service. And let’s be honest, if it’s going to take a couple of weeks for your package to arrive to Oregon, it’s helpful to know where your pony is in transit.” Phase two of the PonyTracker service, estimated to be available in early 2016, will include a “PonyView” app, allowing the customer to view a live feed of the camera on the pony’s GPS unit.

In addition to the increased ship time there will be a few other changes to SmartPak’s delivery protocol. First, customers will be required to inspect their pony’s hooves. Should their pony need hoof care, it will be incumbent on them to call the farrier or be subject to a re-shoeing fee. And while all SmartPaks over $40 and all orders over $75 will still ship free, the ponies do appreciate treats as a tip. In fact, early test results have shown that the ponies are very hungry after long trips. We recommend proactively rewarding them with treats to protect your person and property. Please also note that SmartPak is not responsible for any supplements in SmartPaks consumed during transit.