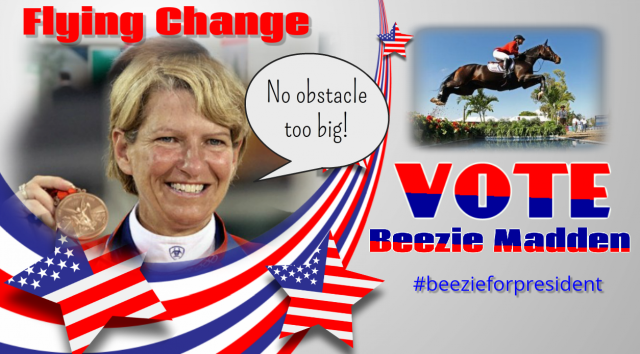 We just want to make it known that Horse Nation totally jumped on that #BeezieForPresident tag months ago.

In a political move that simultaneously left pundits scratching their heads and the nation’s equestrian population uniting at last, Beezie Madden announced Tuesday evening that she intends to run in 2016 for President of the United States of America. Mirroring Republican candidate Ted Cruz’s announcement at Liberty University in Lynchburg, Virginia, Ms. Madden also made her intentions clear in an academic setting, essentially party-crashing a meeting of equestrian students at Cazenovia College in the same town that Madden Sales calls home.

While Madden was vague on unimportant details like under which party she would be running, her stances on important issues were made clear, more than once triggering cheers and standing ovations from her small but devoted audience. Madden stressed the critical importance of education for America’s youth, citing various young rider programs as cornerstones of the future that she promised to develop further. Higher education was mentioned as well, with Beezie remarking fondly on her years competing through the Intercollegiate Horse Show Association and her multiple Cacchione Cup victories before graduation.

In addition to education, Madden emphasized the conservation of land as a key issue facing America today, with agricultural spaces disappearing from the nation at an alarming rate. She vowed to take a stance to protect open spaces, providing places for equestrians to enjoy their favorite pursuits. When asked about her stance on foreign affairs, Madden used her own international record as an example of what could be done if we all believe in ourselves and work together–in an across-the-aisle move, she credited the American reining team as international leaders with whom she planned to work closely.

Madden did state that her husband John would be staying on at Madden Sales to oversee the day-to-day operations. Cortes ‘C’ instead will be accompanying Ms. Madden on the campaign trail. While it’s too early to select running mates, rumors have already begun circulating that George Morris has been approached and has not immediately turned down the offer.

Beezie’s speech concluded with the Cazenovia equestrian student body on its feet, chanting in unison her campaign slogan: “Flying Change.”

Tuesdays at a drag. But not today! Just heard beezie has announced her run for presidency 🙂 #beezieforpresident #beezie2016

It’s only Tuesday and Beezie Madden is running for president. I don’t know how the rest of the week can even get better #beezieforpresident — Zaria (@alltellzipper) March 31, 2015