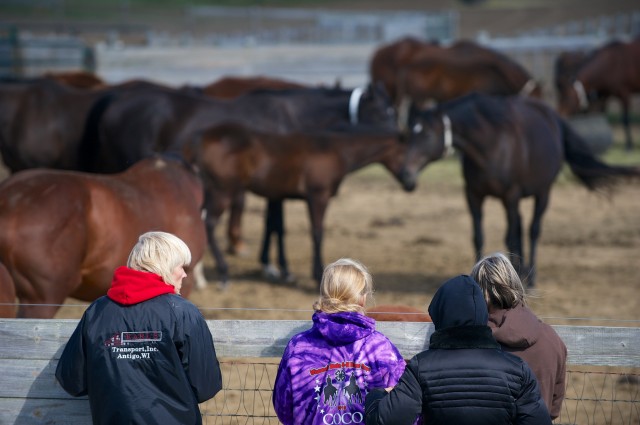 Last week we asked you where you purchased horses, and how you found out about them. We had well over 200 responses to each question–thanks for voting! Here’s the breakdown of where Horse Nation acquires new equines:

Where do you purchase horses?

Almost half of all responses (47% or 106 votes) replied that they purchased horses directly from the seller, meaning that a large part of the equine industry is still through face-to-face interactions. (In an increasingly automated world, I find this fact refreshing.) Another 35 voters replied that a trainer or agent finds the appropriate match. Bringing in 29 votes or 13% of responses was horse adoption, which is an encouraging statistic for rescues and placement groups of all kinds.

Of note was the nearly 10% of responses that are acquiring horses directly from the track (Thoroughbred or otherwise.) I would be interested to know what this percentage may have been five or ten years ago before the OTTB trend started gaining momentum in recent years! When combined with the previous statistic on horse adoption, it’s great to see that nearly a quarter of all responses were helping to rehome a horse in a second (or possible third) career.

Smaller percentages went to sales barns or horse traders, as well as auctions (18 and 10 votes, respectively.) One responder voted “other,” but did not leave any comments as to where they purchased horses so that will remain a mystery for now!

How do you learn about horses for sale?

This question gathered a total of 276 responses and was much less cut-and-dry than the first question, indicating that it’s worthwhile to advertise horses for sale in a variety of ways. 69 voters, or exactly 25% of responses, reported that they found their horses on sales sites like equine.com, horseclicks.com or one of the many other horse-selling sites available. Coming in a very close second by just one vote, 68 responders found their horses through word of mouth. I found this answer fascinating, as it demonstrates again that the horse industry is very much a face-to-face world, even in the digital age. I did not expect to see this many votes for word-of-mouth sales.

Further down the line, Facebook groups received 44 votes. Groups exist for almost any kind of horse available–regional listings, discipline listings, breeds, etc., allowing potential buyers to narrow their search and then comb through posting after posting. Internet classifieds were also a player with 24 votes, including sites like Craigslist and regional listings. Coming in with 28 votes, print ads showed that “old school” advertising still has a place in the horse world, including newspaper classifieds as well as fliers and posters. Shared Facebook posts came in just behind with 26 votes–think of this as a digital “word of mouth.” And once again, a few votes came in for Other.

So what does this all mean?

I won’t pretend to be a statistician or market analyst, but from a horse owner/buyer/seller perspective I’ve gleaned a few concepts: the direct sale looks like the way to go. If you’re a seller, definitely make use of horse listing sites as well as Facebook (all Facebook categories combined made up the most popular place to find horses for sale) but don’t ignore print media either. Networking with fellow horse owners, both as a buyer and a seller, remains one of the most important ways to spread the news. Direct sales usually allow buyers and sellers to get to know each other as well as the horse, meaning that lasting matches can be made for good, loving homes.

Thanks to all who voted! Have your own sales experiences to share? Leave a comment, or mosey over to our forums, Equestrians Anonymous.