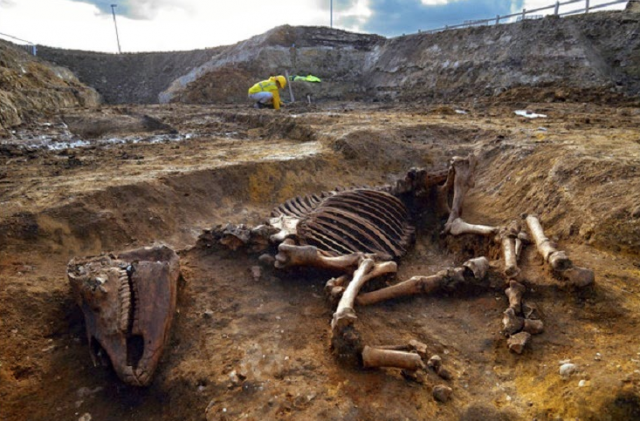 The skeleton of a Roman horse estimated to have died 2,000 years ago has been unearthed in England.

“It was in a pit around it which we think were dug for quarrying gravel in the Roman period. The other signs were fragments of pottery and fragments of other animals. It was probably just on the edge of a settlement, there is certainly a Roman settlement to the north of it and it’s in the general area of Roman activity,” Alison Dickens of the Cambridge Archaeology Unit told Cambridge News.

The horse suffered from a broken leg that may or may not have been the cause of death, since there was evidence of the fracture healing. Dickens suspects the horse may have been euthanized after a specific incident and buried, since it is unusual to find complete remains.

“It is a fascinating discovery. The horse may have been just a workhorse for the quarries, which supplied construction materials for the nearby Roman settlement, or it might have been someone’s prize Thoroughbred; we won’t know until tests are done,” commented Keith McNeil, chief executive of Cambridge University Hospitals.

A full analysis has not yet been carried out, but initial investigations by a specialist found the horse to be around 14.3hh. At 2,000 years old, the horse could have been a member of the auxilia, or Roman cavalry, typically deployed on the flanks and used to protect the infantry.

Records show that Romans prized stallions from Parthia, Persia, Media, Armenia, Cappadocia, Spain and Libya. They preferred horses with a good temperament, stamina and resistance to extreme environments and food deprivation. Horses were fed barley and each cavalryman was allotted six bushels each month. According to Polybius, a Greek historian, a horse received 3.5 pounds per day. Infectious wounds and lameness were the primary causes of death. Roman horses were unshod, though their riders carried “hippo-sandals” for rough roads. The sandals were tied to the hooves and used only for short durations.

The Roman saddle was made of leather-covered wood and had two front and two rear horns to keep the rider in position, since there were no stirrups.

Horses and riders trained in small pens and then progressed to long marches and the practice of charges and counter-charges. There were also tournaments, called hippika gymnasia, held regularly to display cavalry member’s skills. For these tournaments, riders dressed in ornate armor. Arrian, a Greek historian, published the short work Ars Tactica in 108 A.D. about the festivities. He had this to say …

“The horsemen enter fully armed, and those of high rank or superior in horsemanship wear gilded helmets of iron or bronze to draw the attention of the spectators. Unlike the helmets made for active service, these do not cover the head and cheeks only but are made to fit all round the faces of the riders with apertures for the eyes . . . From the helmets hang yellow plumes, a matter of décor as much as utility. As the horses move forward, the slightest breeze adds to the beauty of these plumes. They carry oblong shields of a lighter type than those used in action, since both agility and smart turnout are the objects of the exercise and they improve the appearance of their shields by embellishment. Instead of breastplates the horsemen wear close-fitting Cimmerian tunics embroidered with scarlet, red or blue and other colours. On their legs they wear tight trousers, not loosely fitting like those of the Parthians and Armenians. The horses have frontlets carefully made to measure and also have side armour.”

Horses were similarly bedazzled with complete silver head armor.  See those tiny holes on the sides? Those are for the horses to see out of.

Here is a modern re-creation to give you an idea of how all the tack looked on a horse.