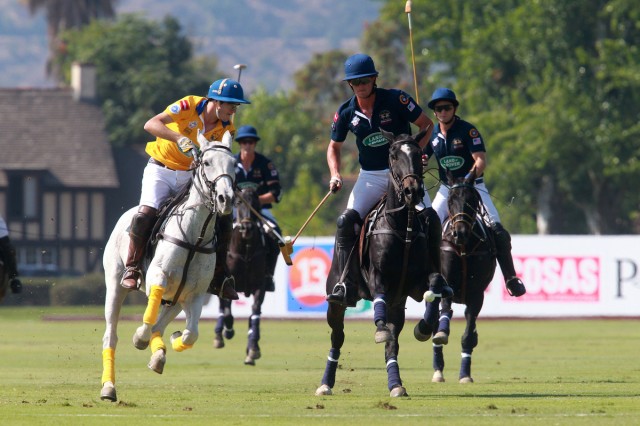 The American contingent remains undefeated thus far in the Championship, taking place this week in Santiago, Chile. Tomorrow they’ll face off against England, alongside Chile vs. Brazil.

The FIP World Polo Championship takes place every three or four years, with the 2015 tournament being held at the San Cristobal Polo Club in Santiago, Chile. The U.S. has qualified for the final round of the tournament six out of the nine times it has been held since the inaugural Championship in 1987, with its best finishes being fourth place in 1992 and 1998 and winning the championship in 1989. The team qualified this year by winning the FIP Zone A playoffs, going undefeated against regional rivals Canada, Mexico and the Dominican Republic.

A video profile of the USPA Championship team:

Their first Championship match was against Argentina on Saturday. It was a fight to the finish, with the lead being tossed back and forth between the two teams throughout the match. After a goal from about 130 yards out by the USA’s Filipe Viana tied things up, the U.S. defeated Argentina 11-10 in overtime.

Coach Joel Baker said afterward, “I am so proud of these guys. Not only did they beat them on the field but had to come from behind to win in overtime. We are all very proud we sent the defending champs home.”

They had no time to rest on their laurels, though, with a match against Brazil less than 24 hours later. Team USPA went with the same four players that triumphed over Argentina — Jesse Bray, Felipe Viana, Remy Muller and Patrick Uretz — and put it away 9-7.

Baker said, “Argentina and Brazil have dominated the World Polo Championship since the beginning. It is a really a big deal for United States polo to be in a difficult bracket and come out undefeated. Now it’s on to the semi-finals. We have a lot of work ahead of us.”

The win makes USA the top seed in its bracket heading into the semi-finals Tuesday with the final match-up to follow on Wednesday. Keep up with all the action by following the United States Polo Association on Facebook and Twitter.