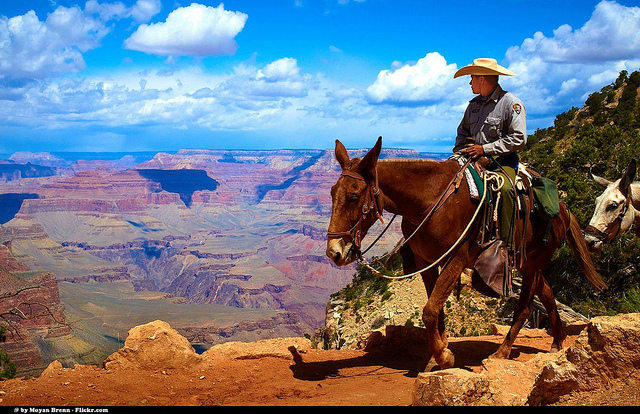 Whether you “rode the rims” yesterday or in 1922, riding a mule to the bottom of the Grand Canyon is not for the faint of heart!

The Grand Canyon National Park Facebook Page recently released some incredible archival footage of a few brave souls crossing rope bridges and traversing fast waters by mule back in 1922, and it will make even the craziest eventer’s heart pound. The switchbacks are sharp and steep, and even an average spook could send a mule and rider plummeting hundreds or even thousands of feet at certain parts of the trail. This particular trek is a trail on the North Rim which slowly works its way to the Phantom Ranch, an aptly named Park Lodge with its own glorious history.

Click on this image to be taken to the video:

The rickety rope and wood bridge you see the riders cross was replaced by a 67 ton steel bridge about seven years after this footage was taken. That bridge, though a true engineering feat to build in such a remote area, is certainly much safer, and could hold all the canyon’s riding livestock at one time without breaking a sweat.

The Grand Canyon has been offering mule rides down the canyon rims since 1887, and still do today. Anyone can sign up for this once in a lifetime adventure, with rides that last just a few hours to treks that span over one or two nights. Wrangler guides give history, interpretation, and geology information throughout the ride, but it’s really the vistas and expanse that say it all.

To give you a sense of what it’s like to attempt a Grand Canyon today, Ralph Moratta took a GoPro along on his ride to Phantom Ranch from the South Rim. As you will see, while the trails have become more permanent and the bridges less terrifying, this is still a death-defying journey. Granted, the mules of the Grand Canyon have a pristine reputation for their behavior and surefootedness on the trail, but as we all know, anything can happen when it comes to equines of all types!