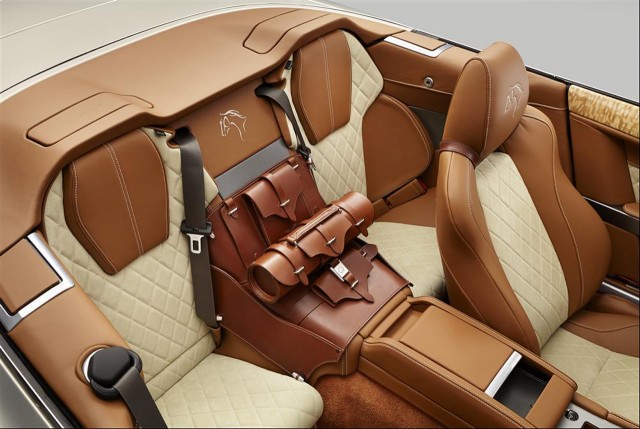 The Horsenista, HN’s luxury lifestyle editor, is back and she’s ready for some car shopping. First stop: a one-of-a-kind DB9 worth over a quarter mil. (Can’t wait to roll up to the barn in that sweet ride!)

Aston Martin has been making luxury sports cars since the 1950s and its image is founded on the fictional character James Bond at the wheel of his sleek DB5 in 1964’s Goldfinger.

No matter your style, that image is hot to trot. Aston Martins have long been one of my favorite vehicles and now they have shot straight to the top of the list after unveiling this equestrian-themed DB9.

The car was commissioned by a dealership in California. Starting with a DB9 Volante, the Q division of Aston Martin — they just love to play up the James Bond references — gave it an equestrian theme with saddle tan leather and diamond-quilted ivory trim, specially-embroidered horse-head logos and saddle-style luggage fitted to the rear console. Ya know, for all your horse gear.

The car was originally auctioned in August 2014 at the Menlo Charity Horse Show, held in Los Gatos, California, with $10,000 of the proceeds benefiting the Vista Center for the Blind & Visually Impaired. Last week it was resold on Ebay for a cool $260,665.