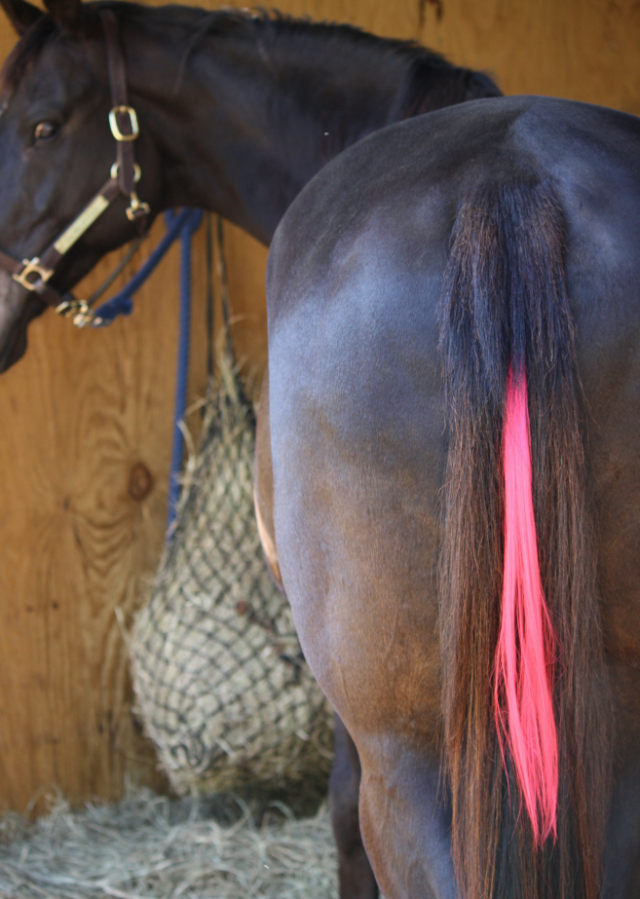 Kim Zacha’s youngest daughter loved to paint horses in vibrant colors. That artwork was the inspiration for Colorful Manes and Tails. I found Kim’s company via Twitter, though it has also been featured in Western Horseman, Horse Illustrated, Horse and Rider, and Rocky Mountain Rider magazines. The idea of “adding some color to my ride” for only $5.50 with free shipping was too good to pass up. I received my sample pack just a few days later.

I found the extensions super simple to use. The “hair” is attached to a comb clip that snaps on to the horse’s real hair. The extensions are very light, packing a punch with color intensity rather than volume.

The suggested placement for the extensions is at least two inches from the top of the tail. Colorful Manes and Tails come in 20 vivid colors like royal blue, flame and neon green as well as six natural hues such as sorrel and chestnut. Spiderman looked fetching in his hot pink. For every pink extension sold a donation is made to the Breast Cancer Research Foundation.

But did it stay in? The simple answer is yes. I had the hair extension clipped in for almost three hours. I rode at the walk, trot and canter on the flat as well as turned him out to graze. Baby flies are running rampant in east Texas this time of year, so plenty of tail swishing occurred during that time as well. The hair extension stayed perfectly placed.

For added durability testing, I tried the extension on my Great Pyrenees. I want it noted that these extensions are not marketed for dogs, but I was really having fun making all the creatures pretty.

Elsa found the hair extensions much more distracting than the horses. Once caught, she began chewing on it unmercifully. She looked only slightly guilty about it.

After unclipping the extension, I brushed through it with my fingers and it looked good as new. The website states you can wash the reusable extensions gently with soap and cool water.

Bottom line: These hair extensions are fun. They make my inner Pony Club kid squeal with excitement. They are also surprisingly practical. Adding red to a horse’s tail warns they are a kicker, green shows the mount is unpredictable or young, and yellow cautions the horse is a stallion. The extensions are much brighter and easier to apply than the ribbons of yesteryear. I venture to guess they will stay put longer too.

For nighttime riders, the company even offers fiber optic light up extensions.

For more information about Colorful Manes and Tails, check out their website.