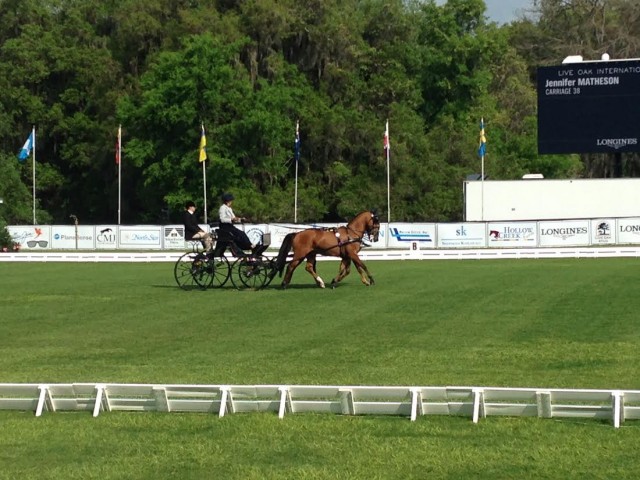 World-class combined driving is center stage this week at Live Oak International, taking place March 18-22 in Ocala, Florida. Lisa Lach brings us a report from the first day of competition.

It was a driven dressage day at Live Oak, beginning with FEI Single Pony division. Tracey Morgan kicked off the competition with a nice 43.84, which held up as the lead score for the division. That remained the lowest score of the morning until Amy Cross put up a 42.94 in the FEI Pair Pony division.

The afternoon kicked off with a show-stealer from Chester Weber and his FEI Four-in-Hand Horse team. As the defending champion of Live Oak 2014 and the silver medalist at the World Equestrian Games in Normandy, the expectations were high as he came through the gates into the ring. Boy, did he deliver! It was incredible to watch his test and he put up a 33.44, by far the best score of the day.

Also in the FEI Four-in-Hand Horse division were Allison Stroud (49.26) and Misdee Wrigley-Miller (46.25), both of whom also represented the US at WEG in Normandy.

Overall, the day was incredible. The weather was perfect, the driving was incredible and the caliber of horses competing had me drooling.

Up next on Day 2: Intermediate dressage, plus the jumpers begin with a 1.35m Power & Speed class and a 1.4m stake class. Some top riders will be in the mix, including Beezie Madden, Laura Kraut, Jessica Springsteen and Ireland’s Cian O’Connor. (So, I am freaking out from excitement!) For the full order of go for both jumping classes, visit www.liveoakinternational.com.

Want to learn more about the sport of combined driving? Here’s a primer.
Tweet