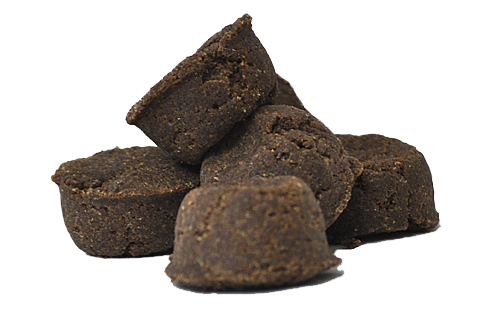 Born from the need for a safe treat for an older lesson horse diagnosed with Cushing’s, Laura McEvoy RVT founded the Barn Bites division of Saguaro Products, LLC in 2010.

Product testing began under the advice of Dr. Janet Arlitt DVM and the treats were tested by Equi-Analytical Labs.  The first batch was found to be high in Omega-6 fatty acids. Unhappy with that result, Laura went back to the drawing board, experimenting, analyzing and taste testing. She utilized Industrial Labs in Colorado and Mid-West Labs in Nebraska, for a quicker turnover time, testing the recipes for the Omega-3 fatty acids that became a priority.

It took five years to bring the perfect treat, rich in Omega-3 fatty acids, extremely low in starch and sugar, to the market.  The total NSC is 2.7%.  Veterinarians recommend products with less than 10% NSC for metabolic horses.

Omega-3 fatty acids in the diet have been touted with improving skin, hair, hooves and the immune system as well as decreasing arthritic pain and inflammation. Normally found in fresh grass, Omega-3s are often lacking in metabolic horses kept on dry lots. Flax seed is very high in Omega-3 fatty acids and is the primary ingredient in Barn Bites Sugar Free.

This chart, provided by Barn Bites, takes a look at the Omega-3 and Omega-6 in several popular coat-enhancing supplements.

I received my box of Barn Bites Sugar Free last week and immediately took them out to my testers. You’ll remember my crew …

22-year-old Quarter Horse. A gentleman and a scholar. Due to his refined age, I have started to make more informed choices about his diet.

14-year-old Thoroughbred. A glutton and a farter. Gumpert loves to eat, but what he eats doesn’t always love him.

11-year-old Thoroughbred. The loveable skeptic. Spiderman is definitely my picky eater of the bunch.

First off, these treats smell amazing. My daughter smelled them inside the truck and promptly asked if they were brownie cookies. These are the kind of horse treats that make you question whether or not you “should just try one” after a long day at the barn. Don’t act like you don’t know what I’m talking about, people.

Spiderman, my finicky boy, took a good long sniff of the treat before eating it. He promptly spit half of it back out in my hand, but then proceeded to eat the remains and request a second. Gumpert ate his without even thinking about it. Aggie was the most interesting reaction. He is usually a reserved personality. He’ll eat what he likes, but rarely beg for more. As soon as he had the first treat in his mouth, though, he was asking for another … and I mean asking. He was running through his full gamut of “tricks” and stretches in the hopes I would reward him with a treat, all while his ears were perky and his eyes were wide with excitement. That’s a big seal of approval from Aggie, folks.