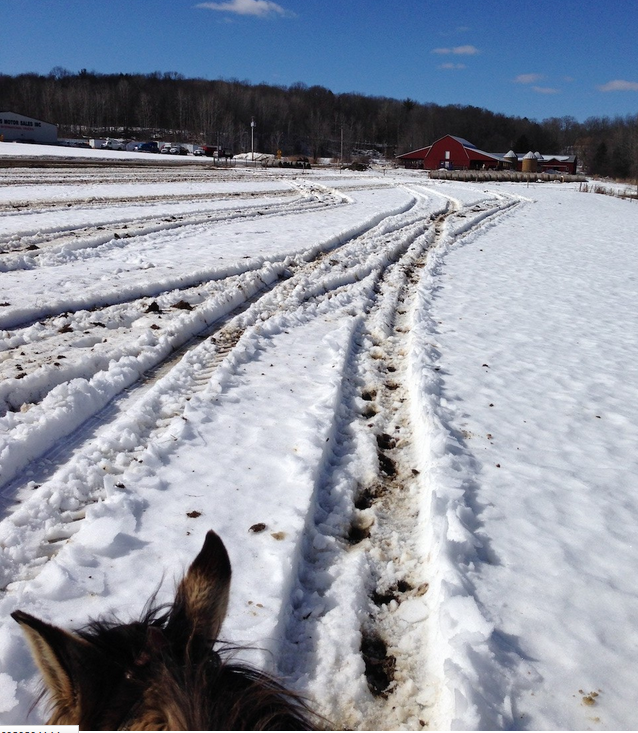 How do YOU deal with the ice/mud/ice/mud cycle?

I hate to say this, knowing full well that many horse people will shudder or roll their eyes, but horse life was actually much, much easier in the winter. Hear me out–the snow, at certain depths at least, made for soft consistent footing over a frozen surface. My horses were consistently spotless with snow-polished socks. Yes, it was cold, but I could regularly expect it to be about the same level of cold (ridiculously frigid February notwithstanding). Red the cow pony had adjusted to the fact that it was going to be cold and settled into a routine of nice consistent work.

And then it began to thaw–the snow softened on the south-facing sides of the farm. Ice dams slid off the roof (or, alternately, didn’t, revealing all the places the roof was more like a sieve.) Yes! I thought to myself, picturing lovely mild afternoons perfect for long hacks over just-reveleaed ground, the creek burbling happily along free from its prison of ice.

Okay, yeah, it looks pleasant from here…but it’s all wet and mud and liquid cow manure. No thanks.

Except No! Because early spring in western New York, and likely many other places around the world, actually sucks. The sugar folks love it–the maples do their best work when it’s mild during the day and below freezing at night for the all-too-brief syrup season. And that’s about it for perks of this time of year: This freeze-thaw-freeze-thaw-freeze cycle drives the rest of us nuts.

Case in point: It was a beautiful and glorious 50 degrees on Monday afternoon. I headed out to the barn to saddle up and go for a ride, selecting a fairly flat and usually well-draining field. We had a wonderful 45-minute session, with an additional 20 minutes spent attempting to shed my beast out.

24 hours later, I headed out to the same field, after a particularly warm (read: 35 degrees) night in which the thaw continued. This day, however, had dropped down to just above freezing with winds around 20 mph. Just a day after such a lovely spring afternoon, this raw nearly-back-to-winter effect made for an unpleasant ride, partially because my horse was laboring through the thawed-out mud thanks to the night before and partially because the other three horses still in their pasture just a few fields away were careening about like idiots with their heels over their heads, as though they had never experienced a cold breeze before. Oh, and the farm help, riding the warm-weather tide from Monday, was spreading cow manure in the field where I was riding. Charming.

Pros: the tractor marks gave me a nice lane to ride in instead of breaking through wet snow. Cons: they were full of cow manure.

And then that night the temperature dipped back down in the teens again, meaning that any melt-off is now refrozen. I’m not even going to attempt to go for a ride today–sure, it’s sunny out, which means that there will be a thin sheen of water on top of any ice that reappeared overnight. And under the ice is going to be a layer of softened snow. And under that is going to be a soup of saturated earth waiting for warmer days to dry it out. It’s only a matter of time before things like culverts and fenceposts start to settle and lean, ushering in a spring full of hasty repairs.

The horses are covered in mud. The pasture isn’t draining like it should thanks to a big pile of snow at the bottom. Mercifully, all of my horses are currently barefoot so I am exempt from the peril of losing shoes in the mud–for now. I love the idea of spring, the promise of warmer days and drier ground and grass. But I hate the season itself.

How do you cope, Horse Nation? What’s early spring like for you and your horses? Am I just being a big weenie and hatin’ on spring for no good reason? Leave your comments below!