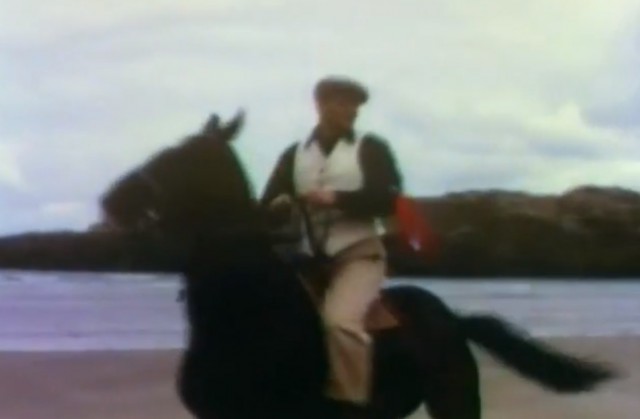 The iconic horse race scene from the 1952 John Wayne classic never, ever gets old.

Okay, I’ll confess it: I spent Sunday evening with my in-laws watching The Quiet Man, the quintessential picture that probably gets re-watched all over the country on St. Patrick’s Day, no matter how much you might cringe at the oversimplified picture of Irish village life (or my personal anti-favorite, the outrageous implied and apparently-at-the-time socially acceptable wife-beating.) Confession out of the way–like any good John Wayne movie, there’s an epic horse scene, and it deserves a closer look.

If you haven’t seen The Quiet Man, here’s a brief plot synopsis up to this point (spoiler alert!) Sean Thornton (Wayne) returns to Ireland to purchase the family farm where he was born, dodging some shady past. He falls for the fiery Mary Kate Donaher, whose brother Squire “Red” Will Donaher refuses to give his permission for the pair to marry (because he wanted to purchase the Thornton farm for himself.) In an attempt to smooth the way for the couple, the townsfolk conspire to trick Donaher into thinking the Widow Tillane wishes to marry him, but only if Mary Kate is out of the house first. Here’s where the horse race comes in:

So what exactly is going on here? How does a horse race settle anything regarding courtship and marriage? The ladies set their bonnets on stakes by the finish line and the gentlemen race to grab the bonnet of the lady they’d like to court. Mary Kate, being an independent young woman, originally refuses to put out her bonnet for anyone, having recently quarreled with Thornton anyway–but when her brother demands it after he hears that Thornton is pursuing the Widow Tillane, she begrudgingly jams her hat down on a stake.

The race itself is a rough trip, starting on the relatively flat and sandy beach but heading up into the hills over some tough going. While a pair of stewards appear to be calling fouls, it doesn’t seem to stop the gentlemen from bumping each other off the course or cutting some corners to try to get ahead. Overall, it’s an exciting race, including a British cavalry-esque bank and drop, a splash through the shallows and tide pools, and a last-minute sprint to the finish–but of course Sean Thornton is eventually victorious to grab the Widow Tillane’s bonnet. When the field thunders by, the only bonnet left is Mary Kate’s.

The horse race scene was filmed on the shores of Connemara, marking one of the first films in cinema history to be filmed (almost entirely) on location. However, in doing some historical digging, there’s no evidence that any such race was part of the traditions of the Connemara region, nor was there any record of a traditional “bonnet race” anywhere in Irish or British history. However, elsewhere in Ireland, point-to-point beach races have become part of the equestrian culture, so The Quiet Man does follow historical fact in this regard.

The bonnet race could be a bit of a historical stretch of the idea of racing for ladies’ favor; other historical evidence in Britain and Ireland shows that similar races were held on foot for a token put up by each lady. The Quiet Man simply makes a connection and puts it on the screen. (Personally, I’d probably take the winning horse and not the rider…who’s with me?)

Today, the Connemara region does host an organized beach race meet at Omey, and the Laytown Races are also famous on the opposite coast of the island for being the only beach races run under the official Rules of Racing.

In conclusion–The Quiet Man beach race may not be 100% historically accurate, but it’s pretty close, and it’s still a fun viewing experience in any context.