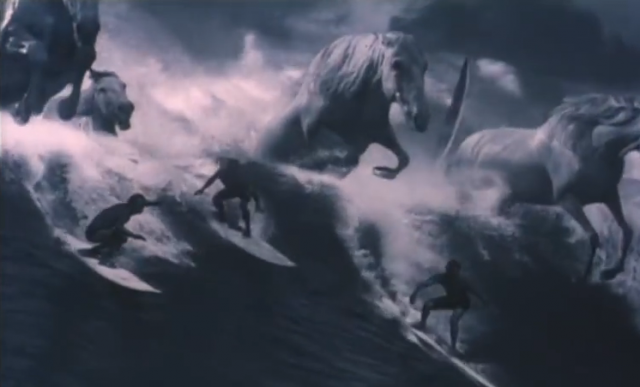 “Surfer,” a critically-acclaimed Guinness ad, was considered a landmark achievement when it was released in 1998 in the UK.

Guinness has a history of looking to horses for ad campaign inspiration.

And horse people have occasionally looked to Guinness to inspire healthy digestion in their horses.

But this Jonathan Glazer-directed commercial takes the horse-Guinness connection to the next level. It was the cornerstone of a surfer-themed advertising campaign launched in 1998 to promote the beer in the U.K. Inspired by Walter Crane’s 1893 painting “Neptune’s Horses”…

…and drawing inspiration from Herman Melville’s novel Moby Dick, the commercial was considered ground-breaking when it was released. The Sunday Times even lauded it as one of the greatest television commercials ever. Explains the website Campaign Live:

The galloping sea horses of the Guinness “surfers” spot ushered in kind of advertising spectacular that had never been seen before in the UK. It cost the brewer a small fortune to make but its impact was astonishing and many people still rate it the greatest ad of all time. Using state-of-the-art technology, it was a true jaw-dropper in which crashing waves turn into stampeding horses that appear to be racing a group of surfers to the beach.

The ad was the result of nine days spent shooting surfers in Hawaii and a further three filming horses in a studio. The spot boasted the same digital technology as that used for the movie Titanic and continued the theme of all good things come to those who wait with the surfers waiting for the ultimate wave just as Guinness drinkers wait for their pint to settle.

What do you think?