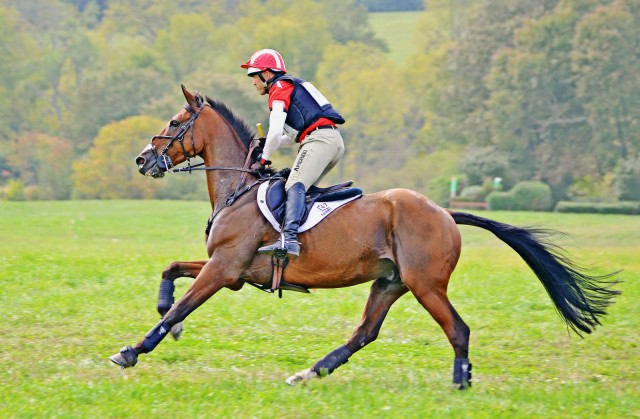 This chestnut Irish Sport Horse is no stranger to the upper levels of eventing with a slew of titles and placings to his name. Under Frank Ostholt of Germany, he was eighth individually at the 2008 Olympics and competed at the 2010 World Equestrian Games.

Karen O’Connor purchased Mr. Medicott in preparation for the 2012 Olympics and placed in the top five in a number of prep events including a fourth at Rolex and a win at Bromont. They finished ninth individually in the 2012 Olympics in London as the US’s best performance in eventing.

In 2013 Phillip Dutton became Mr. Medicott’s newest rider. The horse aggravated an old tendon injury at the 2014 Rolex, which forced Mr. Medicott and Dutton to withdraw from WEG consideration, but the gelding is back in action and looking forward to a great 2015.

As the above video states, 2012 was pretty much a banner year for Flexible and Rich Fellers in the grand prix ring, culminating in Flexible being named USEF International Horse of the Year.

However, even in 2015 at the age of 19, the Irish born-and-bred stallion is continuing to dominate, recently bringing home the $25,000 SmartPak Grand Prix at HITS Thermal.Though just under 16 hands, nothing can keep this horse down, not even two potentially career-ending injuries.

Known around the barn as “Reggie,” Ballynoe Castle RM has been described by rider Buck Davidson as “all class.” Imported as a young horse, Davidson and Reggie have partnered in eventing competition since 2008. The pair’s claims to fame have included two World Equestrian Games, two good placings at Rolex (fourth in 2014 and third in 2014) and strong appearances at Burghley and Badminton. Ballynoe Castle RM recently made history when he became the USEA’s highest scoring event horse of all time, ending Winsome Adante’s seven-year reign on the top.

This international eventing superstar is currently piloted by Britain’s William Fox-Pitt, one of the best in the world. The pair won Rolex 2014 in great style and also placed fourth at Burghley, helping Fox-Pitt win the FEI Classic Series for the 2013-2014 season.

Bay My Hero was bred in Ireland, sired by an Irish Sport Horse approved Thoroughbred stallion Cult Hero. Bay My Hero (known as Moonie) has two full siblings in training, on track to be equally talented in eventing.

Cruising passed away at the age of 29 in September 2014–but no list of Irish sport horse greats would be complete without him. While the stallion achieved great success in the grand prix ring, his contributions to both show jumping and eventing were made as a breeding stallion, helping the Irish Sport Horse as a breed achieve great notoriety for athleticism, heart and longevity. Cruising sired two horses listed above, Flexible and Mr. Medicott, as well as eventing stars Harbour Pilot and Cruise Control.

Of course, this is just the tip of the iceberg when it comes to Irish equine athletes. Leave your comments with your favorite Irish Sport Horse!