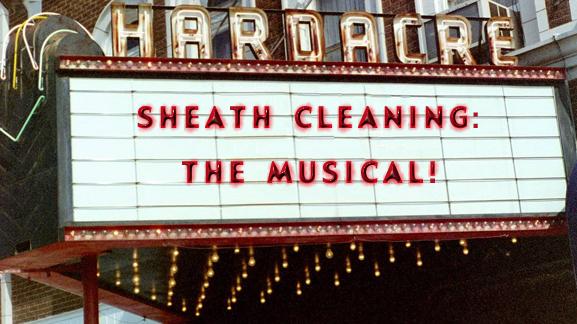 Cleaning out a horse’s junk is one of the least fun aspects of gelding/stallion ownership. Now, because misery loves company, there’s a sing-along to ease your pain.

I do a guest-spot each Monday on Horses in the Morning, a live webcast aired weekdays from 9 to 10:30 a.m. EST. When you combine the weirdness of Horse Nation with the no-holds-barred style of hosts Glenn the Geek and Jamie Jennings, you just never know where our conversation is going to wander — and this past Monday, it veered down a particularly dark and treacherous alleyway: the topic of sheath cleaning.

One thing led to another, which led to Glenn rifling through the HITM archives for a dusty copy of an original song Jamie performed on the show a while back. It’s just too good not to share (sorry, Jamie!), so we at Horse Nation took it upon ourselves to take the thing public.

Presenting, “The Sheath Cleaning Song” (see lyrics/suggested accompanying facial expressions below should you desire to sing along):

Aren’t you glad I

that I had to stick my arm

up in your pee pee.

When you stuck it out it creaked

You’re as fresh there

Either this means I love you or else

Well-played, Jamie! If you ever get tired about talking about horses on the radio, perhaps you can take a stab at musical theater… “Sheath Cleaning: The Musical!” anyone?

Readers, remember to tune in to Horses in the Morning each day for a light, lively, entertaining look at the horse world and the people in it. Hosted by Glenn the Geek and Jamie Jennings and produced by Jennifer H., the show features entertaining conversation, out of the ordinary guests, numerous regular horse related segments, listener call in, contests, giveaways and more. HN’s own fearless leader Leslie Wylie joins in each Monday at around 10 to share a weekly “Wacky World of Horse Nation” report.

Where to Listen: Listen live each weekday between 9 and 10:30 a.m. Eastern at horsesinthemorning.com, horseradionetwork.com or the embedded flash player on the left side of this page. The show is also available immediately each day as a recorded podcast on the websites or through iTunes or Zune. Be sure to follow ‘Horses in the Morning’ on Facebook as well.