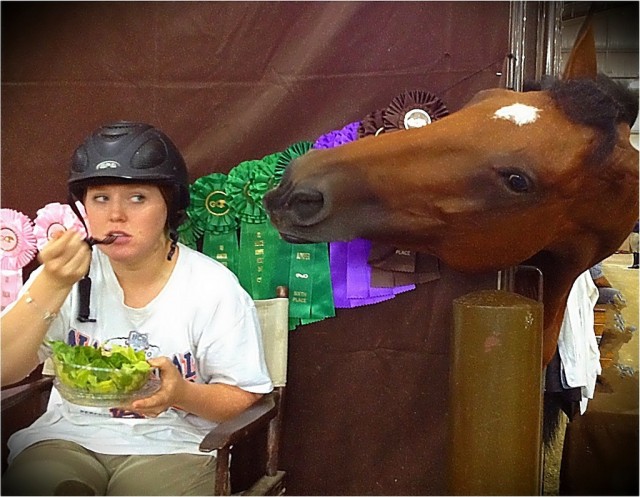 With GMO produce such a hot issue right now, organic food is trendier than ever. But would you go organic for your horse?

“Is that an organic salad?” carterse/Flickr/CC

Every time you turn around these days, there’s a new study and a new argument lined up either in favor or against going organic: it’s healthier for you. It’s better for the environment. It’s more sustainable. (I’m just reporting what I hear, not what may or may not have been scientifically proven.) Organic produce cannot be genetically modified, so if you’re in the anti-GMO camp then eating organic is your best bet, whether or not it may have all of those other benefits I mentioned. Organic/non-GMO pet food is becoming a huge industry as well. So it was only a matter of time before horse feed jumped on the organic bandwagon too.

There are a handful of organic feeds available on the market right now, with a few more available on a local scale from neighborhood organic feed mills. Each markets itself slightly differently: the most widely-available brand is a whole-grain no-pellet mix and includes oats, hulled barely, peas, flax seed meal and whole flax seed. The majority of other brands seem to follow this whole-grain formula, and I consistently noticed organic peas high on the ingredient list. (One smaller company did offer a 12% pellet and did not include peas, and one of the local mills was producing an organic sweet feed.)

I dug into the pea thing a bit — reportedly, field peas are a common feed in Europe, though they haven’t caught on as much in the United States. I speculate that this may be because the common feed grains — corn, wheat, barley — are mass-grown and cheap to produce in the United States, especially in the so-called “breadbasket” or Midwest. Owners who have switched to the organic and whole-grain diet for their horses report great results, especially in aged horses. Some owners are even making their own organic blends by buying the corn, peas, barley and what have you in bulk from the local feed store and mixing them up themselves in their own individually-tailored formulas.

When I thought about it, it’s not as off-the-wall as it originally seemed–horses around the world used to live on whole grains before we got to this stage of processing pelleted formulas and special balances. Many horses around US still live this way (the ranch where I worked for many summers fed whole, soaked oats and the horses seemed to do just fine.) Walk into a well-supplied feed store now, however, and the options are overwhelming: there are dozens of brands with dozens of special formulas depending on your horse’s nutritional needs, level of activity, quality of forage, and stage of life. Now we’re deconstructing horse feed back to whole grains, but adding the organic label, which confuses things even more. (There’s also the hefty organic price tag.)

Part of me, of course, is happy that we’ve come so far in equine nutrition as to be able to carefully balance our grains with our forage for one complementary feeding program that fits individual horse’s needs. But the other part of me wonders just how far it’s going to go — on one of my research trips into a well-known message forum, I found horse owners who were feeding their horse entirely on the “eat local” concept, and a owner who was following a “yin and yang” feeding philosophy (the gist of her argument was that barely was a “yin” feed so she had to balance with a “yang” hay. I didn’t ask.) Are we just following our own trends in human food in the grocery stores and diet magazines? (Fermented juices, vegan, whole-food, local food, ethically produced, sustainably raised… the list goes on.)

So where do you stand? Is organic horse feed the way of the future, supporting sustainable agriculture and ethical stewardship of the land? Or is it just another marketing gimmick?

I do not profess to be an equine nutritionist, so any of the information I present here is only what I have found in my research and my personal opinion. Any changes you make to your horse’s feed should be done carefully and considerately.