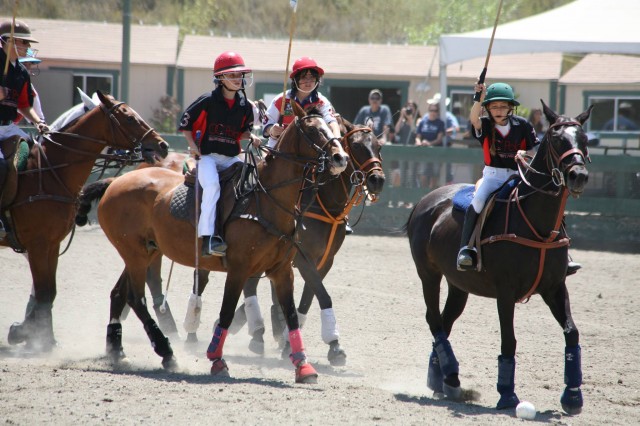 Young riders don’t need to be royalty to get hooked on polo thanks to exciting youth-focused programs that are making the sport more accessible than ever before.

You’ve heard of the Intercollegiate Horse Show Association (IHSA), catering to college students. Maybe you’ve even heard of the Interscholastic Equestrian Association (IEA), aimed at middle and secondary school students. But what you probably didn’t know is that these riding-through-school opportunities extend beyond the hunter ring on to western, dressage, eventing and even … polo?

As it turns out, young riders don’t need to be rich or to own a string of polo ponies to get started with polo — or even to travel across the country competing in championship games.

Example: This weekend 18 interscholastic polo riders from Maryland, Texas, California and Toronto have traveled to Indio, California, to play for the Girls’ National Interscholastic Tournament trophy.

We chatted with Amy Fraser, the director of the United States Polo Association’s Intercollegiate/Interscholastic programs (and a graduate of them!), to find out how these young ladies got to where they are today.

“Unlike what you see Prince Harry doing with outdoor polo, interscholastic polo is played in an arena,” she explains. “So that’s two teams of three riders each, and since it’s indoors, it’s more similar to a hockey arena, where you can play off the walls. Normally it’s a dirt surface — unless you’re lucky enough to have an outdoor grass arena.”

Much like IHSA, riders get a random draw of a polo pony owned by the hosting polo club. Unlike IHSA, that pony will also play for the opposite team.

“All games and tournament games are played on a split string,” explains Fraser. “Each horse plays twice, once for each team. So every team gets the good horses and not-so-good horses to alleviate home field advantage.”

Typically, a team will play anywhere from two to 10 games in a season, depending on the number of teams in their region. After two qualifying games in their region, top-scoring teams go to a regional tournament, and lower-scoring teams go to preliminary tournaments where a few may qualify to go to Regionals. Teams cover travel expenses for all their competitions and pay an entry fee, while USPA covers all the administrative costs, including horses, umpires, and trophies—adding up to around $15,000 per tournament. The USPA runs over 30 I/I Tournaments each season.

Once a winning team is determined in each of the four regional tournaments in the United States, the winning teams go on to Nationals. That’s where the 18 girls, aged 11 to 18 and representing all experience levels from being practically born on a pony to having under a year of riding experience, will find themselves this weekend.

“What I’m most looking forward to at the Girls’ National Championship in California is that simply it is on the west coast. In all the years of I/I women’s polo, every tournament has been on the east coast, said Marissa Wells, captain of the Maryland team.

She’s not the only one who will appreciate the milder weather. “I have never been to California, so I am looking forward to not only seeing this state, but playing in the warm sunshine,” said Samantha Hussey of the Toronto team.

For some riders, this isn’t their first time at Nationals. Maryland is competing to defend its title over the runner-up Central Coast team … but they’ve both had a year to make their teams stronger.

“Since Nationals last year my team and I have greatly improved our team cohesiveness as well as our playing ability,” said Trista Noland of the Central Coast team.

Competition can get pretty fierce at a polo tournament, but the USPA program emphasizes good horsemanship above all.

“When the teams are at a tournament all the teams have to groom for each other,” explains Fraser. “While they’re not playing, they help untack, cool out, etc. The kids are each assigned horses to take care of and feed over the competition to instill good horsemanship.”

Good luck to all the competitors this weekend!

Want to try interscholastic or intercollegiate polo yourself? Cost varies by club, but according to Amy Fraser, director of the USPA I/I programs, it’s comparable to the cost of showing hunters or eventing. To find out more, check out the USPA website and Facebook page!