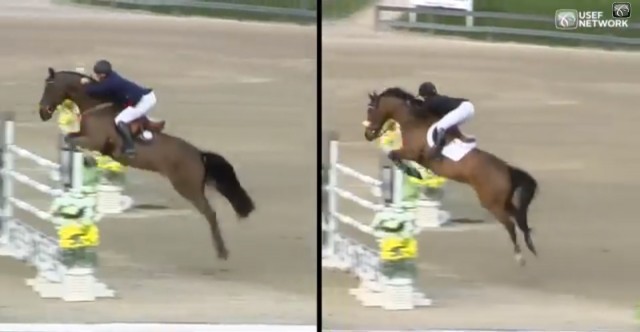 As an enthusiastic yet sadly untalented jumper, I love to live vicariously through the USEF Network’s side-by-side jump-off comparisons–I will certainly never be clearing these fences myself, but I can happily sit here in my chair and figure out exactly where one horse and rider pair managed to edge out the other. Last week’s $30,000 SmartPak Grand Prix at HITS Thermal (the Desert Circuit) was a tight race, with less than half a second separating the top three: Will Simpson and The Dude, Lisa Carlsen and World’s Judgement, and Richard Spooner and Cristallo.

USEF Network put together this side-by-side video of Simpson and The Dude versus Carlsen and World’s Judgement:

Phew! Close one. The horses are nearly stride-for-stride early on in the jump-off (fence 3 looks almost coordinated,) but World’s Judgement goes just a little wide before the combination and The Dude gets the jump by just a few tenths of a second.

The $30,000 SmartPak Grand Prix marks Simpson and The Dude’s eighth Grand Prix victory at HITS Thermal in this circuit. That’s a staggering number of victories against the top riders of the West Coast (and beyond!) According to a news article by PhelpsSports, Simpson said of The Dude that “he just will not be denied. Something recently has happened in his brain and he thinks he owns the place. He sets his sights on a clear round every time we come to this ring.”

With an attitude like that, it looks like The Dude is unstoppable. HITS Thermal runs through March 15, concluding with the AIG $1 Million Grand Prix.