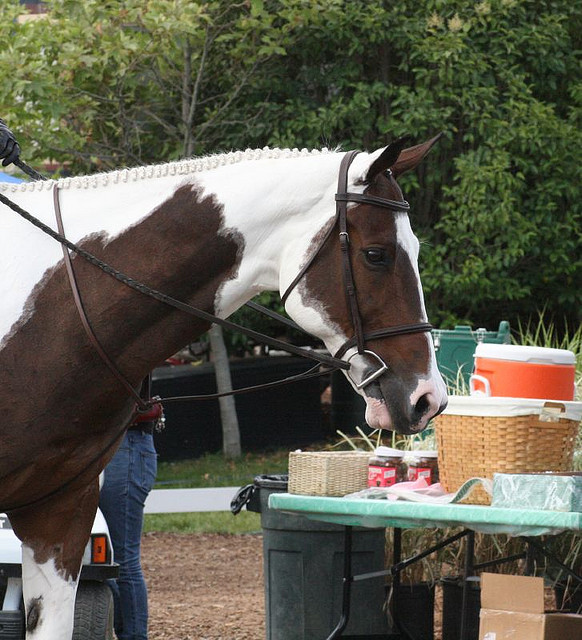 Hint: The answer is neither blue/black nor white/gold.

If you’ve gone anywhere near the Internet lately, you’re probably aware of the brouhaha surrounding this dress:

Due to some weird nuances of human perception, some people see it as white/gold while others see it as blue/black. Just out of curiosity…

I know, right? Makes you feel a little bit crazy… not unlike the way I feel sometimes trying to differentiate pinto coat patterns. Are those spots brown on white, or white on brown? What’s the difference between a tobiano and an overo again? A paint and a pinto?

Test YOUR pinto knowledge against this quiz. Scroll down to see the answers!

1.  What is the name of this pinto pattern?

2.  What is the name of this pinto pattern?

3.  What is a mix of tobiano and overo coloring called?

4. If this horse is a pinto, what is its color called?

5. What is this facial marking called?

5. What’s the difference between a pinto and a paint?

6. The terms “piebald” and “skewbald” are sometimes used to describe pinto (or “coloured” horses), typically in England. What is the difference between the two?

1. Tobiano: The most common type of pinto, tobiano is a spotting pattern characterized by rounded markings with white legs and white across the back between the withers and the dock of the tail, usually arranged in a roughly vertical pattern and more white than dark, though the ideal is a 50-50 distribution, with the head usually dark, having markings also seen on a non-pinto horse. i.e. star, snip, strip, or blaze. Tobiano is a simple dominant trait caused by a single gene and therefore all tobiano horses have at least one tobiano parent. A DNA test exists for tobiano.

3. Tovero: The tovero spotting pattern is a mix of tobiano and any form of overo coloration, usually reflecting that the horse carries more than one set of genes for a spotting pattern. For example, a tovero may have a mostly white tobiano pattern on the body, but also have blue eyes with or without a white head. Horses can carry multiple spotting genes at the same time, producing characteristics of several patterns.

4. Dominant white: A family of sabino-like white spotting patterns, all dominant white coats are dominantly inherited, analogous to human piebaldism. While some forms are associated with pure white coats and are considered “true white,” not pinto, most actually show great variance in the amount of white. The 11 known forms of dominant white have all occurred spontaneously in the past century from non-white parents. Many forms of white spotting that were called “sabino” by their owners and fanciers are now classified as dominant white. The distinction between sabino and dominant white is unclear, as they are visually similar and involve closely related genes.

5. Medicine hat: an uncommon pattern where the poll and ears are dark, surrounded completely by white, a true “medicine hat” pinto or paint usually has a predominantly white body, sometimes with dark coloration by the flanks, chest, and above the eyes.

Thus, while it is always correct to refer to a horse with a non-leopard spot pattern as a pinto, a spotted horse should only be called a Paint if its ancestry is known or if it displays conformation that is clearly akin to that of an American Quarter Horse. A leopard spotted horse is usually called an Appaloosa, whether it is a registered Appaloosa or not. However, “paint” or “painted” was also an archaic word used by 19th century writers for assorted spotted horses bred by various Plains Indian tribes and thus is occasionally used in this context when describing all types of spotted Mustangs.

7. Piebald: Any pinto pattern on a black base coat, thus a black-and-white spotted horse.

Are you seeing spots yet? Share your results in the comments section below! And keep it tuned to Horse Nation for Part II, coming soon. The topic: Appys!