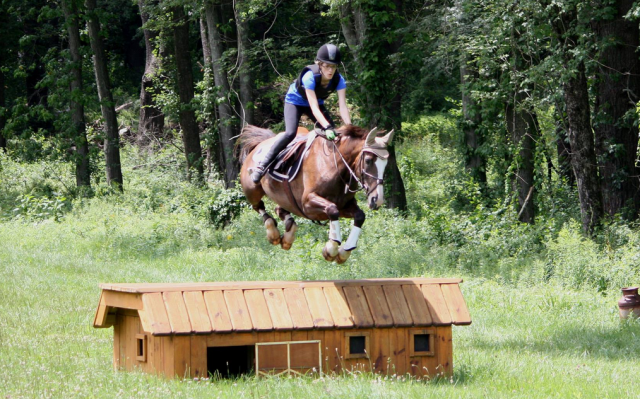 Ashly Snell: “Overconfidence at its finest. Jumped from a standstill after pilot error. Pilot was ejected. On the plus side, apparently the mare is part hovercraft, which should come in handy.”

Shannon Gauthier: “My daughter Emerson was in a jump clinic with her trainer on our friend’s pony Pixie in December. But it wasn’t a jump that caused this fall, it was someone (who called out ‘door’) standing at the indoor opening that spooked Pixie. The first thing my daughter said when she got the air back in her lungs was, “did you get that on video???” She jumped right back in the saddle and finished her course. She and Pixie are still good friends :o)”

Lynn Thompson: “This is my boyfriend and my mare attempting to run the poles. Sierra was feeling a little full of herself. I wish we had gotten her victory lap after he hit the dirt! (He’s fine, just a bruised pride.”

Shelby Allen: “Having a cross country lesson with Kyle Carter. I think we would’ve taken the flag on that one.”

Firefly Farm: “My lesson student, Rachel, was riding Zeus, one of Cruising’s sons (the now-deceased Irish Sport Horse) and he launched himself into the air. Notice how the board is only 4″ tall.”