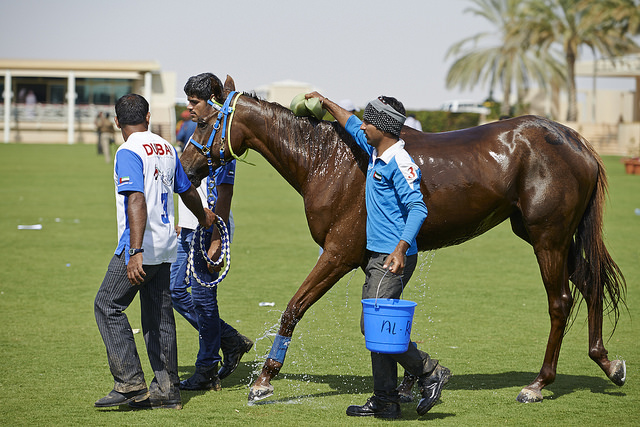 High-profile fatalities put pressure on the FEI to act.

The FEI has removed two endurance events in the United Arab Emirates this month from the official FEI calendar to investigate allegations of horse welfare infractions and non-compliance with FEI rules. This move comes after criticism of the FEI’s failure to react quickly to numerous doping scandals and horse deaths, the most recent being the February death of Splitter’s Creek Bundy (caution: graphic photos in link) at a nationally-sanctioned, but not FEI-sanctioned, endurance race in the UAE.

“We have made this our top priority and will make our conclusions as speedily as possible so that the recommendations can be presented to the Bureau for urgent consideration,” FEI President Ingmar Voss said.

The timing of this FEI move–just as Ingmar Vos takes over the role of FEI President from Princess Haya Bint Al Hussein–is sure to raise a few eyebrows. Former FEI President Princess Haya long faced criticism for what was seen as a conflict of interest in regulating endurance since her husband, Sheikh Mohammed Al Maktoum, is an endurance rider who was suspended in 2009 for doping, and whose racing operation was plagued by additional doping accusations in years since. The new FEI President seems to be intent on addressing endurance infractions right out of the gate.

Endurance is the fastest-growing FEI discipline, with a 300% increase in the number of events since 2004 (now over 900 each year). Because of this increase, the FEI introduced new rule changes in 2005, 2009, 2013 and 2014 to promote clean sport and horse welfare–but large purses and the separation between owner and horse in a big racing operation seem to have created a culture of putting the prize money first rather than the horse.

Though there are  some endurance riders and trainers giving the sport a bad name, others are rallying in a social media effort to promote clean racing. To raise awareness, they are putting light blue ribbons on their horses’ bridles and adopting the slogan “We run on clean water” and the hastag #endurancedurable.