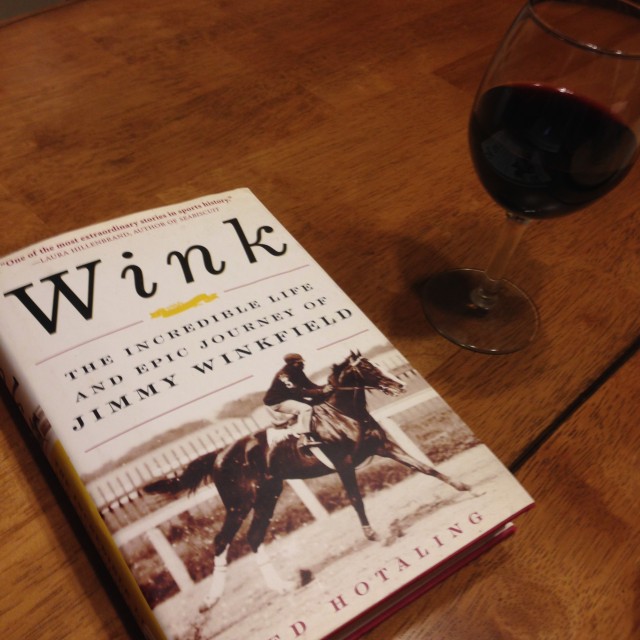 If you love history and horses, you won’t be able to put down this biography.

When it’s cold, windy, and you have no real pressing need to be at the barn, the best thing to do is forget about the winter doldrums with a beverage and a good book. My most recent find is Wink: The Incredible Life and Epic Journey of Jimmy Winkfield by Ed Hotaling, which not only tells the story of the last African-American man to win the Kentucky Derby in 1902, but also exposes an  period of equestrian history few know about today–when African American jockeys went from dominating the American racing scene to being driven away by racism and anti-gambling legislation to ride in Russia and Europe in the years running up to World War I.

As if isn’t enough to draw you in, the first few chapters hook horse nerds with all kinds of trivia, such as the fact that the familiar racing bugle call is the U.S. Cavalry’s “First Call,” which roused soldiers to their first formations–or that black jockeys found a haven in Lexington away from the Ku Klux Klan because the “‘rich white folks’ were not about to allow murderers and arsonists to run around their multimillion-dollar farms with their thoroughbreds and highly talented jockeys and trainers.”

And, as we find out, Winkfield is one of the best–he seemed to have a magic touch and excellent judgment of how to save his horses’ energy, leading him to win even on less-than-brilliant horses. But as you might expect, life for a black jockey was not easy in the U.S., even for one as talented as Winkfield. The biography continues on with the story of an athlete’s amazing career and the challenges he faced–from racism to a tenuous marriage to the drama of racing and competition itself.

The race scenes nearly made me forget about the predictions of snow keeping me from the barn–there are outright brawls between jockeys, brilliantly woven suspense between races, and most importantly–accurate descriptions of racing, from gripping play-by-plays to the interpersonal conflicts between jockeys and owners. The author Ed Hotaling gets so many bonus points for getting these details right where so many other writers get it wrong. He writes in a way that is accessible for non-horse people without overly dumbing it down for those who already know what he’s talking about.

My one quibble would be with the frequent connections Hotaling attempts to make between Winkfield’s life and current events of the time. It’s true–the jockey seemed to find himself in the same place at the same time as significant figures of the day from Josephine Baker to Adolf Hitler, but sometimes this historical/cultural context falls flat, as in the several pages of comparing Winkfield’s marriage while he raced in Russia to the ill-fated steeplechase scene in Anna Karenina. Don’t get me wrong–I love Anna Karenina–but even the author admits that the two stories really don’t match up together all that well. So why force a connection? Winkfield’s life is interesting enough on its own.

The author Ed Hotaling, a journalist and amateur historian who died in 2013, made great strides to expose parts of African American history that so many have forgotten. His particular interest in black jockeys also resulted in another book, The Great Black Jockeys, which is great–because after breezing through Wink, you’ll be left wanting to know more.

“If you go beyond the word ‘slave,’ as historians rarely do, you find real people like you and me just trying to do the best they can,” said Hotaling in an interview. “We also need to believe that we can change the way that history is presented.”

You can find Wink: The Incredible Life and Epic Journey of Jimmy Winkfield wherever books are sold, including Kindle and print versions on Amazon.com, as well as used books on Half.com.