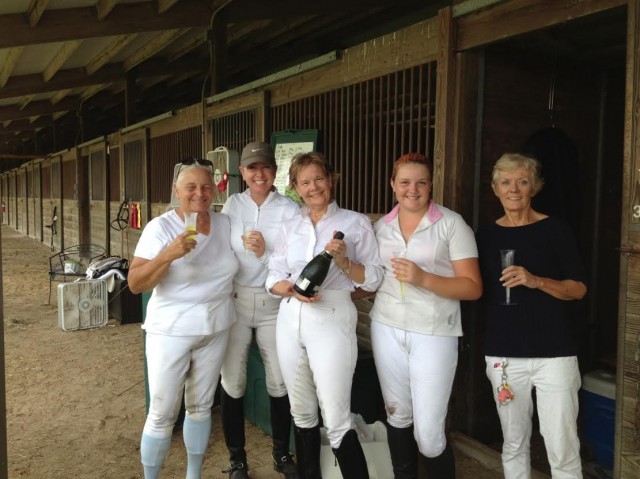 Like fine wine, dressage ladies just get better with age — and these “Golden Girls” are approaching magnificent. Shelley Van den Neste, their coach, shares their story.

Recently I was in the Netherlands searching for another good horse for one of my clients and watching a rather large class of Prix St. George riders. I noticed that not one of them looked to me to be over 35 years old.  That evening I was having a glass of wine, talking to a well-known professional in equine sales who asked me how popular the Young Rider Program was in my area.  I told her the truth. Most of my clients were over 60.

She said, “You mean they are old ladies?” With the same vim and vigor that my clients bring to the barn every day, I remarked, “No, Madame, we don’t call them ‘old ladies’, we call them ‘Golden Girls’!” She then became very interested in my story, especially since she could also be classified as a Golden Girl!

During the past few years, I find the average age of my students has increased considerably. At last count, I have five serious and enthusiastic dressage riders over the age of 60. One day I endeared myself to them by remarking that they reminded me of the Golden Girls on the TV show that was popular in the ’80s. The nickname stuck!

Teaching the Golden Girls, although challenging in some respects, is very rewarding as this group of highly educated and successful women revel in the smallest accomplishments and celebrate each ride.  They make the time and are willing to commit the resources, sometimes at considerable sacrifice, to become accomplished dressage riders. They understand that success does not come quickly and that it is a long journey.

These women appreciate the journey and are more interested in achieving harmony with their horse than racing for the gold medal. They seem to appreciate and celebrate each small step that brings them closer to their goal. This is why they delight in a celebratory glass of champagne after each show, regardless of the scores. They love their horses and value what the horses do for them.

I have found that these “girls” refuse to give up! They never let an injury or mishap stop them. Last summer, just before her 68th birthday, a student was thrown from her 5-year-old Canadian Sport Horse and broke nine ribs. While we were in the ER, and she was awaiting admission into ICU, she asked if I could ride her horse for a couple of days while she recovered! I thought she was out of her mind on morphine, but six weeks later she was back in the saddle and showing in Wellington!

Another rider, 71 years old, fell off while mounting her stallion. Her horse bolted and left her behind the saddle. A few days later, she called and asked why I was late for her lesson. I thought for sure she was still injured, rushed to her farm, and asked her how she was doing since she had serious bruising in all the wrong places! She said, “What do you think?” I turned around to see the actual evidence (as she dropped her drawers) and was shocked to say the least. The ‘girls’ like to shock me. We all laughed about that for months!

One of my Golden Girls, not satisfied with only dressage and trail riding, also drives her Morgan horses. Even after serious mishaps in all three disciplines, she shows no signs of slowing down! One day I showed up to give her a lesson and she had broken her hand while killing a rattlesnake with a shovel. She hid the bruised and swollen hand from me so I wouldn’t refuse to teach her that day.

These women have had children, suffered the loss of loved ones, had broken bones and surgeries… and they are not going to let an accident cause them to quit!

The GG’s at our annual Christmas party

Golden Girls are well educated and have been successful in their careers. They usually pick up concepts quickly, but at times they are forgetful and this can lead to hilarious situations that tend to keep everyone and everything in perspective!  One time, a Golden Girl was riding her dressage test at a IALHA National show. She was so focused (and excited) that she forgot to halt and continued right through X! The judge rang the bell and she just shrugged her shoulders laughing, galloped back to A and started again up the centerline. However, she didn’t whine or feel sorry for herself.  We all had a good laugh!

Another Golden Girl didn’t move off X after the first halt quickly enough, not fully understanding the 20 second rule, and was eliminated but undaunted. She explained her reasoning to me, “You told me to stand perfectly still so I was waiting until he did!”

Another benefit of teaching the Golden Girls is that I get to ride their nice horses! And, Golden Girls know good horse flesh! We have had many a fun-filled trip looking for just the right horse for each of the Golden Girls. These women certainly have their opinions, but they are rational and always willing to take advice.

The founding member of the Golden Girl group came to me 6 years ago announcing she wanted to ride Grand Prix on a PRE. Half of that plan was rational since PRE’s are a wonderful choice for amateurs. Although this client had never been in a dressage saddle in her life, she is now showing Third Level on the PRE I picked out for her in Spain.

These women want realistic goals for themselves and their horses. This is not always the case with younger riders who dream of competing in the Olympics or Pan Am Games! I rarely get an argument when I tell them which shows I would like for them to attend or how the schedule for riding should be arranged. Occasionally, I will have to have them ride a school horse while I fix some training issues with their horses (like the flying changes). They are very understanding, and we always have a good discussion concerning the problems. They just don’t waste time arguing as long as you are reasonable.

So, the next time an older lady rider comes walking up to your barn and claims that she wants to learn to ride the Grand Prix, tell her to grab a helmet and get in the game! Oh, and tell her she will be in good company since the average age of the rider in USDF is heavily weighted in the Golden Girl Club!