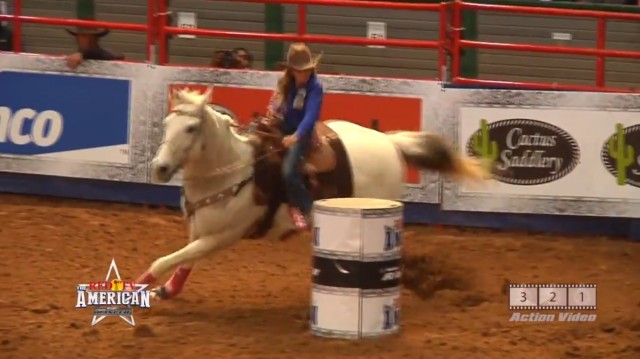 This tiny 9-year-old girl beat over 100 seasoned barrel racers in The American rodeo semi-finals this weekend.

Chayni Chamberlain may be small, but she be fierce. The third grader from Stephenville, Texas proved that fact this weekend when she beat over 100 of her fellow contestants in the barrel race at the semi-finals of RFD-TV’s The American, the richest one-day rodeo in the sport. While we’ve seen cute videos of tiny tots bouncing along on their saintly ponies on the cloverleaf before, little Chayni can just straight-up ride. Check it out:

Okay, she may weigh only 60 pounds, but this kid must be all muscle. According to this article on Barrel Horse News, Chayni’s mount ‘Dat Flowin Bunny,’ known around the barn as Flo Jo, was actually intended to be Chayni’s mother Callie’s horse. Chayni took over the gelding when she was 7 and has already earned over $15,000 in lifetime earnings, mostly aboard the big gray. Callie stated in the interview that she and her husband Casey will be hauling Chayni and Flo Jo to a few rodeos and barrel races in the near future, but that they’re not trying to push their daughter too hard and burn her out–she is just a kid, after all.

But she has a good chance at bringing home some serious money next week at The American finals on March 1, regardless of her age. RFD-TV’s unique rodeo is an open contest, meaning that contestants don’t have to have membership in any professional rodeo association. The contestants in the finals will be a mix of world champions, invited “living legends” (Charmayne James will be competing) and individual qualifiers. Chayni joins this all-star lineup after placing fifth in her first-round qualifier in November and then winning the Semifinals.

Editor’s Note: Horse Nation recommends the use of helmets for all riders, regardless of age or discipline.