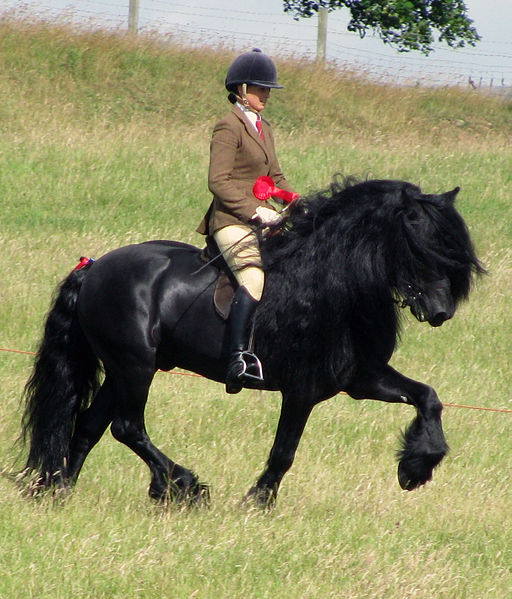 Each of these breeds has just a few thousand members or less globally.

The American Livestock Breeds Conservancy has a list of 18 horse and pony breeds at risk of extinction–some have under 10,000 representatives of the breed globally, while some have under 100. To put that in perspective, a “Critical Status” breed like the Caspian horse (under 2000 globally)  represents just 0.001% of the world’s 58.3 million horses.

The low numbers can be partially explained by lack of demand. This is actually a good thing, and means that responsible breeders did not continue to breed during the economic recession when there was no demand for new foals. However, breeds that were already rare before the economic recession now face the challenge of finding enough genetically diverse stock to keep the breed alive–or else, one day they may join the over 22 breeds of horses already extinct, from the Spanish jennet to the Narragansett Pacer.

The American Cream originated from a mare called “Old Granny” in Iowa, and it is the first (and last) draft horse breed native to the United States. Its unique coat and amber eyes are caused by the combination of the “champagne” gene with a chestnut base coat.

Because Suffolk and Norfolk, England are on a peninsula that was once difficult to access because of marshes to the west, the Suffolk horse has remained remarkably true to the original type–that is, a draft horse bred specifically for farm work, not driving or riding. They tend to have a straight shoulder, which is well-suited to pulling. All Suffolks are varying shades of chestnut.

The Cleveland Bay originated in Medieval times from pack horses that carried goods between abbeys and monasteries, and in modern times this adaptable breed can be seen doing everything from driving the British royal carriages to showjumping or foxhunting. And while the Cleveland Bay may not have flashy coloring, I can tell you from experience–what a ride. They are smooth, smooth, smooth and sensitive, yet sensible. Can you tell I have a serious Cleveland Bay crush?

This ancient Iranian breed nearly went extinct in the 1960s, but thanks to the efforts of expatriate Louise Firouz it made a comeback. Though the Caspian stands anywhere from 9 to 10 hands, you better not call it a pony in Caspian enthusiast circles. This equine’s way of going and conformation are much more similar to a full-size horse than a pony, and the breed was commonly called a “miniature horse” before miniature horses as we know them today started being bred. Interestingly, most Caspian horses reach their full height by just 6 months of age.

The stocky Exmoor pony has had a tough history–from being used as “pit ponies” in mines, to being used for target practice and even food during the first World War, after which only 50 members of the breed survived. Today, Exmoor ponies are used for riding and driving, though about 150 now roam in a feral herd in Exmoor.

The Hackney horse and pony are distinct types, proportioned differently. Hackney ponies are one of the few breeds developed completely in a controlled environment. Christopher Wilson wanted a “roadster” bred for style and stamina, and developed the Hackney pony from Hackney horse stallions and Fell ponies in the 1800s. Hackney ponies have had a strong influence on the “modern-type” Shetland pony.

EDIT: According to the American Hackney Horse Society, in the last 20 years 8928 ponies and 728 horses have been registered in the U.S.

Polly the foxhunting Shire and me

Shire horses come from stock used to carry knights into battle, but the breed was later adapted for farm work and hauling heavy loads over rough terrain–and to this day, some Shires are used in the forestry industry where mechanized vehicles cannot go. The breed nearly went extinct in the 1950s and ’60s, but today they are more popular than they have been in decades despite their small numbers.

The Canadian horse, also known as le cheval canadien, the French Canadian horse or “the little iron horse,” descends from French stock sent to Canada by Louis XIV in 1665, 1667 and 1670. They were extremely popular and did just about everything and everything from riding to pulling freight wagons. Their versatility and hardiness may have actually contributed to their downfall, though–because they were so reliable, many Canadian horses were exported to other countries or used as war mounts (including in the American Civil War). By 1880, they were near extinct, though efforts in the 1970s helped to increase their numbers.

“Colonial Spanish” is not a breed in itself, but a group of about 15 breeds or strains that descend from Spanish stock brought to the United States, and which have had a strong influence on American gaited horses. Some of these breeds include the Spanish Barb, Carolina Marsh Tacky, and the Florida Cracker.

How can they be going extinct when they’re so stinking cute?!
Wikimedia Commons: Annapennel/CC

The Dales pony, a hardy breed native to England, was recently recategorized from “Endangered” to the more serious “Critical” status by the Rare Breeds Survival Trust, an organization that helps conserve and protect native British livestock breeds. Like the Exmoor pony, many Dales ponies were used for mining, and their numbers dwindled severely during and after the World Wars.