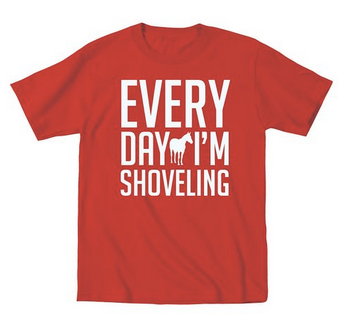 Because nothing says “cool” like a joke you have to explain.

One holdover from my emo teenage years is an affinity for all things that other people just don’t “get.”  Art house films, indie music downloaded from an illicit Limewire feed–the more obscure my entertainment was, the better (horseback riding fit in nicely). When I saw this post from The Pony Habit, all of those feelings came rushing back–I thought, “No one I know is going to ‘get’ this. AWESOME.”

If you’re not in the know, you’re missing out. Obviously. I knew I had to find more equestrian-themed things that would require explanation in the ‘real world,’ and thus, confer upon the wearer an air of exclusivity.

Such as a dapple gray infinity scarf. Does anyone at the grocery store even know what ‘dapple gray’ means, much less what it looks like? No. Perfect.

Or this belt made out of a martingale. (I have one of these, and I delight in wearing it in non-barn situations. Be aware, they run a bit large.)

Dapplebay fits the bill to a T, although their online store is temporarily closed.

That’s OK–believe it or not, there is more than one clothing retailer that combines equestrian jokes with hip-hop lyrics.

This one is just so discipline-specific that random passers-by will stop you on the street and try to tell you about that one time they rode a horse on vacation.

If you wear this one, though, prepare for some odd looks.

And then there are some shirts that are just asking for the equine powers that be to jinx you.

If you’re just looking for  the satisfying feeling of wearing a sort of visual pun–this OTTB tattoo number shirt is a great way to do it.

Whether or not the rest of the world understands–who cares? You know how awesome you and your horse are and hopefully now you have a couple ideas of how to broadcast that to the world!

Or you could just log on to our Equestrians Anonymous Forum. No pants required on the internet.