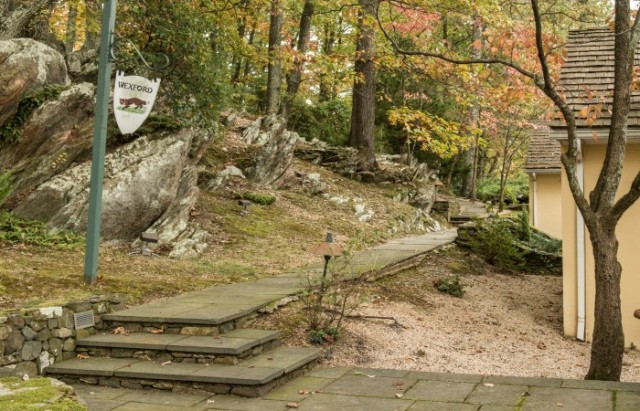 The Kennedys’ weekend foxhunting retreat could be yours for just $1.6 million down…

All photos by Barbara Stampora and Yetta Reid

The 167-acre farm in Orange County hunt country has split-rail fencing, a barn with four stalls, and two apartments attached to the barn–one of which has a bomb shelter built beneath it. The barn also has a hay storage area and water/electric. According to realtor Patricia Burns, the barn does need some TLC as the current owners do not keep horses, but how awesome would it be for your horses to share in a little bit of American history?

And you too, I suppose. But really, if you’re a foxhunter looking to move to paradise, the house is icing on the cake. It’s a 5,050 square foot rancher with four bedrooms and four full and one half bathrooms. The amenities go on and on…gourmet kitchen, built in bookcases, a pool, a patio, a tennis court…but most essential, it has views of the forest and Blue Ridge mountains that would make any bustling city dweller slow down.

Prior to buying Wexford, the Kennedys leased a horse property called Glen Ora in Middleburg. Wexford was the first home the Kennedys built together–and tragically, their last, as JFK was assassinated in November of 1963, the same year the house was built. Quartz.com recently put together a piece on their building process–a fascinating peek into Jackie’s functionally formal design aesthetic, full of clippings from magazines and little notes to the builder like this:

“This house may not be perfectly proportioned–but it has EVERYTHING–all the places we all need to get away from each other–so husband can have meetings–children watch TV–wife paint or work at desk–nurse have own room–help a place to sit–all things so much bigger houses DON’T have. I think it’s brilliant!

Apparently JFK preferred the beach to the rolling hills of horse country, but one can just imagine all the dreams and hopes Jackie had for their own place to escape the constraints of Washington. Just an hour away at Wexford, she could let loose and have fun hunting or just riding with her family as shown in this home video:

Jackie Kennedy sold Wexford in 1964 for $225,000, over double what the family paid for it a year earlier. She continued to ride and hunt in the area for many years, often staying at the tony Red Fox Inn in Middleburg.

You can find more information (and more pictures!) at the Middleburg Real Estate and realtor.com listings.