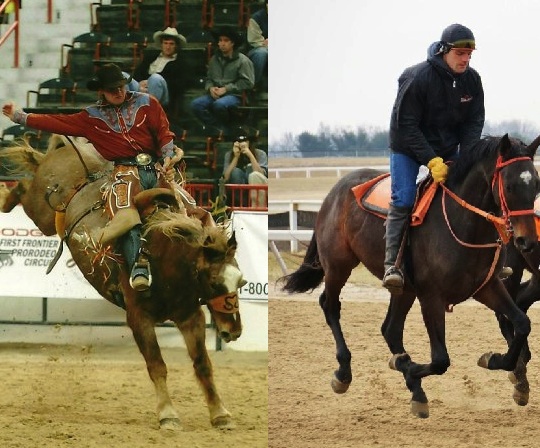 I don’t think I’ve ever used those words in the same sentence before…but for Clovis Crane of Lebanon, Pennsylvania, that’s life.

Clovis is a soft-spoken and humble kind of guy–just from talking to him, you wouldn’t immediately get the impression that he’s at the top of his game in both the race training and rodeo fields. As a trainer, he’s raced nine stakes horses and sent out at least fourteen more stakes runners to other trainers around the country. Crane Thoroughbreds breezes out of Penn National Race Course but also maintains a three-quarter mile training track at the 65-acre home facility. Clovis and his family and staff work primarily to start out young Thoroughbreds, specializing in problem horses especially in the areas of the starting gate and unruly behavior under saddle. With a horse exerciser, large turnout paddocks, trails and an arena, Crane Thoroughbreds is a top-notch facility for training as well as sales prep. Clovis is hands-on daily with the horses, not only supervising his staff but working directly in the barn and on the track.

Clovis (on closest horse) and his staff working young horses in company.

And as if that’s not enough to keep him busy, there’s also this little side hobby of competing in professional rodeo. While Clovis describes his past rodeo accomplishments in his same humble fashion, it’s easy to detect a note of pride in his voice–and for good reason. In a sport traditionally dominated by cowboys from the “rodeo states” of the American West, Clovis Crane of Pennsylvania brought home the All-around Cowboy title from the Professional Rodeo Cowboys Association’s National Circuit Finals in 2009. The year prior, he made PRCA history by winning championship titles in bareback bronc, saddle bronc, bull riding and the all-around at the First Frontier Circuit Finals. (The First Frontier Circuit consists of New England and the mid-Atlantic states.)

So how does a rodeo cowboy find his way to the racetrack? Or was it the other way around? Clovis actually grew up with the Thoroughbreds, breaking and training with his father Joe who is still an important part of the day-to-day operations at Crane Thoroughbreds. He rode races for awhile, then attended Purdue University on a wrestling scholarship. While out in Indiana, Clovis was attracted to the rodeo scene, thought he’d give the bull riding a try, and fell in love with the sport. When he graduated in 2005, he started riding the rough stock professionally and the rest, as they say, is history.

While Clovis is still an avid competitor, clocking rodeos all over the Northeast every season, he’s open with the fact that he can’t devote the kind of practice and time necessary to stay an elite rodeo cowboy–but he’s very content with the legacy he’s leaving in the First Frontier and the national rodeo scene. When he was a little bit younger it was easier to find the drive to be a champion; since those earlier years Crane Thoroughbreds has developed and he’s now more involved with running his business and balancing family life as well. He’s satisfied that he’s done what he’s wanted to do (truthfully, how can you beat winning a national title?) and is happy to keep rodeo as a hobby.