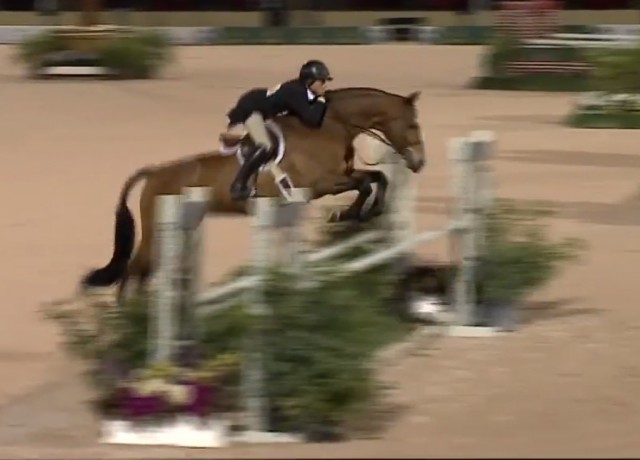 This pair just won their third Hunter Spectacular together in a row. No big deal.

The hunters took the spotlight on Saturday night at the end of World Championship Hunter Rider (WCHR) week at the Winter Equestrian Festival. The class was the $100,000 WCHR Peter Wetherill Palm Beach Hunter Spectacular, and for the third straight year the same horse-and-rider team took home the big prize: Victoria Colvin and Ovation.

Competing under the lights, thirty-two horses tackled Skip Bailey’s course with the top twelve returning for a handy round. Colvin was already winning on her other mount Small Affair with a 176.16 when she and Ovation headed into the arena as the last pair to compete in the handy round. Both horses are owned by Dr. Betsee Parker. Colvin rode Ovation’s second round just a little handier than Small Affair, coming in closer to the trot fence and really opening up the hand gallop to the final fence. She and Ovation marked a total score of 179.41 to clinch their third straight victory in this class.

This year’s victory was particularly meaningful for both Colvin and Parker, as Parker plans to retire Ovation in the fall of this year as the undisputed top junior hunter in the country. This is also Colvin’s last year as a junior, so it’s fitting that Ovation will retire at the same time that Colvin ages out: they will be remembered as one of the top pairs of all time.

Watch the pair’s first round:

…and the handy round: