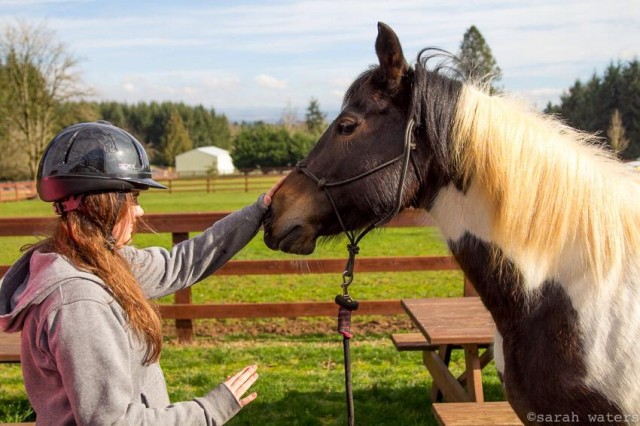 When a mother whose horse-crazy daughter was diagnosed with a life-threatening disease posted a Craigslist ad seeking help, the equestrian community responded the way it always does: with open hearts, open arms and an incredible plan.

Brittany, a 21-year-old from Salem, Oregon, hasn’t had an easy life.

She has autism and cerebral palsy, and in September was diagnosed with a disease called Wegener’s Granulomatosis with vasculitis, an autoimmune condition which her own immune system attacks the blood vessels in her body. It has affected her lungs and trachea, and she currently is at stage 3 kidney failure. There is no cure and no known cause. In November her doctor started her on chemo and on steroids. “This is our journey, but her battle,” explains her mother. “Learning about a disease that we have never heard of before and learning to deal with a new ‘normal.'”

Brittany’s family appealed to the Make-a-Wish Foundation, which grants the wishes of children with life-threatening medical conditions. Brittany’s wish: a horse of her own.

“Brittany has always loved horses,” Reba says. “When she was little she was non-verbal until she was 5 — she would act just like a horse, run around the house on all fours making horse sounds. She never wanted dolls, just horses.” Since then, when it came to horses, Brittany couldn’t get enough. Reba says she devours horse books and movies, and her bedroom is a shrine to all things equine.

Unfortunately, horse ownership was a wish that, for several reasons, just couldn’t come true. Brittany was devastated when she heard the news, and her parents were crushed to have to break it to her. In desperation, Reba posted an ad on Craigslist a couple weeks ago seeking help or just ideas.

She recalls, “It was hard enough to just put it on Craigslist, but I wrote the ad at 3:30 a.m. — I couldn’t sleep as my heart was breaking for my daughter. I was trying to fix it, and I just didn’t know how. I thought maybe someone might have a idea. As I wrote that ad, tears rolled my face. It was from a mother’s heart. I kicked my pride out of the way and just let my heart talk.”

The ad was titled, “Just a girl’s wish for a horse.” The following is an excerpt:

…We asked her, “If you could have one wish, what would that wish be?” thinking it might be a trip to Disneyland or Seaworld. Nope, it was to have a horse she could call her own. One that she could ride, one that she could hug, one that would be her friend. ( Because of her special needs, friends are really hard to find.)

Well, her Dad and I said NO, not to break out daughter’s heart, but because horses are a commitment, long-term. Brittany has chemo, Brittany has doctors’ appointments in Portland, and her Prednisone medications have made her bones brittle — if the horse bucked her off she would break a bone. I have had to stop working to take care of her, and horses take a lot of money.

We told her these things hoping our daughter would understand; well, she doesn’t. My daughter is now severely depressed, we have broken her heart. She said to me, “Maybe it’s just my wish that can’t come true.” I have not seen my daughter smile in days. In fact, the last three days have been nothing but tears and it is ripping my heart in two.

So I have to try right, something, anything. We live in Salem… is there someone close by that would allow my daughter to care for their horse, brush it, feed it, muck the stall, love it and let her pretend that it is hers until she can’t come any more? Is there leasing, or renting? Is there any option for us?

I just want her to have her “wish” and see my daughter smile once again.

Reba couldn’t have anticipated the wave of support from the equestrian community that was headed her way. She received, literally, hundreds of responses.

“I believe this Mother’s heart reached others hearts because the response was huge,” Reba says. “I could not keep up — I was getting emails, texts, voice mails and calls. I have been trying to respond to each person individually and say, ‘Thank you, just for reaching out.'”

Along with the well-wishes, a perfect solution surfaced. “Valarie at Big Hearts Horse Rescue & Sanctuary contacted me,” Reba says. “I thought it was a great fit as they had 16 horses that needed a friend as badly as Brittney needed a friend. Brittany having special needs never has had a friend that stuck around. They still love her but they grew up and are moving on; Brittany still has a lot of learning to do.”

Brittany’s visit to Big Hearts was nothing short of a dream come true. “They treated her like a princess,” Reba says. “She got to walk around and pet all the horses and feed them treats. She was perma-grin all day. What a beautiful group of women.”

Lennez Hitzemann from another local stable, Midnight Wind Farms, also reached out to Brittany with an incredible offer: to give Brittany a horse of her own, named Sage. “Brittany was able to go met her yesterday — she fell in love,” Reba says. “Sage has been sick, too. Brittany said, ‘We need each other. We both are having a tough time.’ She seemed to really connect with Sage. It was awesome to see.”

Reba set up a Facebook page, Brittany’s Battle, so that people can follow her journey. “Well-wishers have done tons, by leaving their comments on her page and supporting her, sending cards and mail. She is beaming. She said, ‘I felt so alone, I had no friends, even when someone said they were my friend, they never made time for me. Now I have a whole family who cares about me.”

Watching her daughter’s wish come true was a dream come true for Reba.

“If I can say ‘thank you’ a thousand times, it would never be enough,” she says. “As I write this line it is with gratitude in my heart, tears on my cheeks and my daughter’s laughter in the background!“