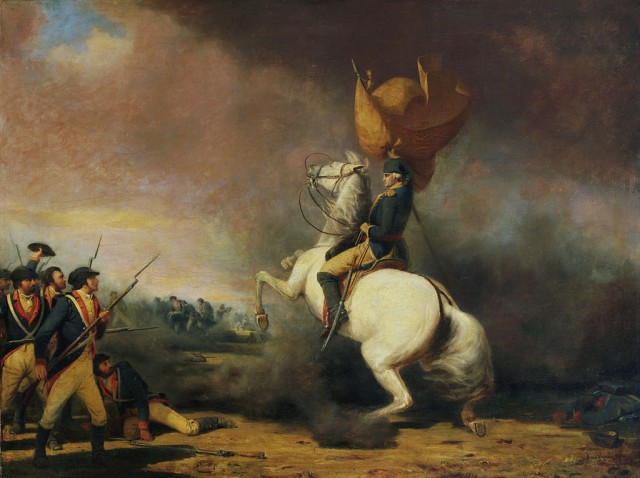 In honor of President’s Day, learn more about the two horses who carried George Washington safely through the American Revolution.

The saying goes that history was written from the back of a horse, and from the earliest moments of the United States as a nation the horses themselves became part of the story. General George Washington, like other war heroes and leaders of the time, was often painted on horseback, most often on a beautiful gray charger:

But did you know that this beautiful gray was actually a real horse? The gray horse so often seen in paintings of George Washington is the general and first U.S. president’s beloved war mount named Blueskin. According to early colonial legend, the horse was a half-Arabian, sired by an exquisite gray Arabian stallion called Ranger who was a gift to a British frigate captain from the Sultan of Morocco. Stories describe some accident befalling the stallion which caused him to break three of his legs; he was given to a friend of the captain living in Connecticut when he miraculously healed on the long voyage across the Atlantic. Whether or not the details of this remarkable story are true, the horse sired a number of fine animals in the colonies including Blueskin. Thanks in part to his Arabian blood, the horse had great endurance and could carry Washington (who was said to be over six feet tall) all day on the march or in battle.

While Blueskin and Washington certainly made for an impressive and morale-boosting sight, the general actually favored his other and less-frequently-painted mount, a chromey chestnut named after the Thomas Nelson who gave the horse to Washington:

Another strong-bodied horse, Nelson became Washington’s preferred mount into battle, because the chestnut was steadier around the sounds of gunfire and cannon blasts. He chose to ride Nelson to accept the British surrender at Yorktown in 1781. The horse was often described by others as “a splendid charger” and by all accounts sounded to be a brave and loyal mount. Both Nelson and Blueskin survived the Revolution unscathed.

After the war, Washington retired both horses to his plantation home of Mount Vernon, Virginia and did not ride them again–perhaps accepting that both horses had earned a quiet retirement after carrying him through the war. He visited them often on his walks around his grounds, and stopped to see Nelson in particular (according to an account by his adopted son) “when the old war-horse would run, neighing, to the fence, proud to be caressed by the great master’s hands.” Both horses lived out their lives peacefully at Mount Vernon–Nelson was reported to have lived to the age of 27.