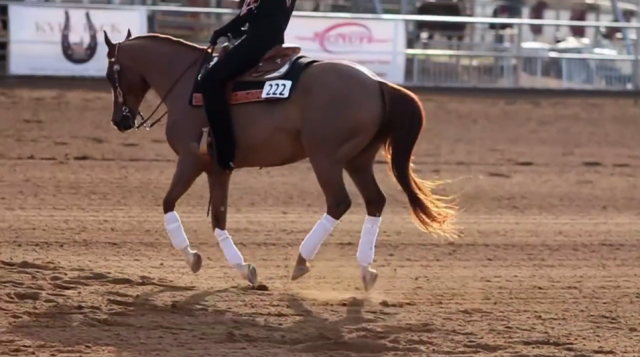 Like you’re going to say no to having any kind of horse show going on in the corner of your screen at work all day.

Magenta chaps and turquoise hunt coats abound at one of the biggest breed shows in the world, Arizona’s Scottsdale Arabian Horse Show, during the month of February…

…and the Arabian folks aim to bring in the masses by live streaming as much of it as you can stand. There are more than 1,300 human exhibitors, many of them showing several horses over the 10-day affair. Already there has been a diverse display of versatility in the first 24 hours of the show.

I wasn’t kidding about the chaps! Screenshot courtesy of iequine live feed

English Pleasure Horses lined up for awards in the Equidome. Screenshot courtesy of iequine live feed

Some impressive side eye from a junior pleasure horse competitor! Screenshot courtesy of iequine live feed

The live feed of the three main arenas is available at nearly any hour of the day between February 12-22 via the Scottsdale Show’s Iequine Page.

The show has been a staple of the American Southwest’s regal equine society since the mid-1950s, when the first show was held at the Arizona Biltmore Hotel; a gorgeous art deco resort designed by Frank Lloyd Wright (what a sight for a horse show, eh?) The first show had only 50 horses and a dozen exhibitors, some who traveled from as far as Texas for the inaugural event. Arabian horse owner and exhibitor Ann McCormick then decided to buy a 150 acre parcel in Scottsdale to transform into the permanent home of the Arabian Horse Show, and it was held there for decades before moving to the enormous WestWorld facility where it is held today.