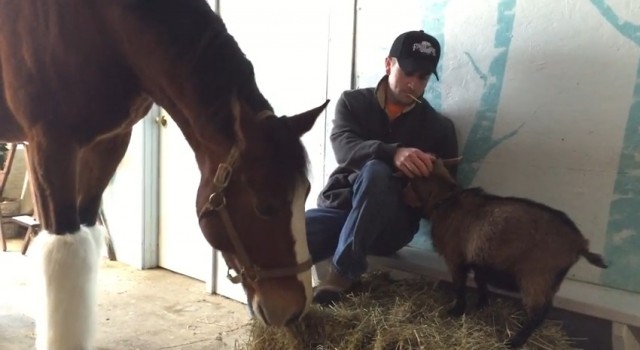 …and it’s amazing. We spoke with Jessica Polednak of Birchtown Stables to get the details on her video ‘Lost Goat.’

Imitation is the sincerest form of flattery–but it never hurts to put your own spin on things either. Birchtown Stables of northeastern Pennsylvania staged their own take on the wildly popular 2015 Budweiser Clydesdale Super Bowl commercial, replacing the lost puppy with a lost goat. Other role swaps include a decidedly sinister-looking alpaca to threaten our tiny goat hero, the stable guy who cradles the tiny goat in his warm embrace and what appears to be a Thoroughbred wearing LEG FEATHERS.

We caught up with Jessica Polednak, the video’s director, producer, camerawoman and editor to get the backstory. Jessica’s actual role is owner and president of Birchtown Stables, Inc. located in northeastern Pennsylvania, where she hosts indoor shows and clinics as well as layups.

She didn’t necessarily intend to make a video — Jessica and her boyfriend Cory originally just wanted to take some funny photos of her horse Alpine, the bay “Clydesdale” in the video, dressed in leg warmers to make fun of his fuzzy coat and out-of-shape physique. One thing led to another, and soon a spoof video was in the works.

Jasmine, the wee goat who stars in Jessica’s commercial, is one of many goats who lives at Birchtown, but is hands-down the smallest, cutest and easiest to work with. Jessica admits that none of the animals are actual actors –“we bribed them with a lot of food” — and it took a lot of being in the right place at the right time with the camera to get the shots. Tina the alpaca made a perfect villain, and with some creative video editing Jessica’s masterpiece hit YouTube. I’m not really sure which commercial I like best, actually — the original is destined to be a Clydesdale classic but this one’s amazing, too!